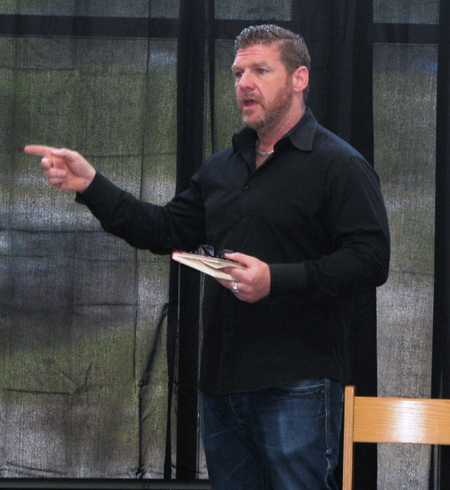 When Justin Bilton asked his English class to read the memoir, “All Souls: A Family Story from Southie,” something amazing happened. Even his least enthusiastic readers read the book from cover to cover. In fact, they were so moved that they wrote letters to author Michael Patrick MacDonald. Seeing an outreach opportunity, Michael offered to come to their school and share his wisdom and his message of hope.

Bilton planned a two-day event around the visit, inviting nearby communities and the public to attend. The goal of the project was “to broaden our understanding of and improve our approach to the effects of violence, drug abuse and the resulting trauma.” Events were held at locations in North Andover and Lawrence on Thursday and Friday June 5 and 6.

When MacDonald took the floor to share his life story, you could hear a pin drop. He spoke candidly about growing up in Southie (South Boston), an Irish-American, working class neighborhood controlled by mobster James “Whitey” Bulger, where “people didn’t expect to live very long.” He recalled having trouble responding when asked how many people were in his family. That’s because he started with 11 brothers and sisters and ended up with 7. Michael suffered the loss of 4 brothers. David and Kevin committed suicide and Frankie was killed in an armored car heist – all in their 20s. Patrick died when he was only 3 weeks old. His sister Kathleen spent 3 months in a coma after falling from a roof while under the influence of drugs. Michael used to lie just so he would not have to explain.

Although it was rarely talked about, Southie in the 1980s had the highest concentration of poor whites in the country. Seventy five percent of the families were without fathers and 85 percent were on welfare. The author recalled being humiliated when he tried to buy movie popcorn with food stamps.

MacDonald described having a “heavy head” much of the time. That was until he met a therapist who was moved to tears when he revealed his childhood trauma. That encounter was a turning point in his life. He said that for the first time, he realized this way of life was not normal and he felt worth caring about. In 1990 he “transferred all that pain and trauma into something positive,” by becoming a community organizer. The author left behind the strict code of silence that permeated through Southie and found his voice through writing.

MacDonald lived through the race riots of the 1970s. When Brown vs. Board of Education made desegregation possible, out of touch bureaucrats decided it would be a great idea to mix the Boston’s poorest whites with the poorest blacks. According to MacDonald, “Bussing re-segregated our community.” The disaster that ensued is now an ugly part of Boston’s history. This was a perfect example, he said, of the need for local control when attempting to solve problems within a community.

MacDonald asked the students if they knew what community organizing was. Surprisingly, not one student raised their hand. He explained that even NAHS is a community, and when a traumatic event happens, like the suicide of 16 year old Colby Kenny in 2011, “the worst thing you can do is not talk about it.”

Junior, Megan Munroe said the author’s presentation helped her relate to living with her 5 year-old brother. “It made me feel like it’s ok to want to protect him from violence on TV, and that other people feel that way too.”

MacDonald’s talk was followed by an interactive presentation entitled “Fostering Resilience in the Students,” a group discussion among faculty, social workers and members of the Lawrence Antiviolence Youth Team, including Carlos Aredondo, Courtney Breen and Tammy Cancel. The youth team discussed their Safe and Successful Youth Initiative, with the goal of reducing youth homicides and serious assaults in Massachusetts.

Although the Lawrence group works with a more racially diverse population, the common thread is how much the North Andover and Lawrence youth populations have in common. For starters, some of the kids literally live down the street from one another, and it is easy to forget that there are poor families in North Andover too. A code of silence can manifest in any household or any community. Then there is this dirty little secret: Helping fuel the Lawrence based drug trade is the purchase of drugs by people from more affluent communities – like North Andover.

Bilton observed that in the letters his kids sent to MacDonald, they spoke of having to cope with familial issues of loss, incarceration, substance abuse and suicide. Bilton found it curious that no one spoke about these sensitive issues in class, yet the angst was apparent in their letters.

When MacDonald spoke to kids in Lawrence, he said they were 10 times more vocal when discussing traumatic experiences. Is it possible that the more affluent communities are under pressure not to show the kinks in their armor? MacDonald said in some ways these tight-lipped kids are more at risk because they are less likely to talk about things that trouble them.

They ended the discussions with plans for the two communities to work together, creating an intentionally diverse peer led group of students from both communities. The ultimate goal would be to foster a supportive sense of community and for these young adults to share common experiences. All in all, it promises to be a very positive and healthy project for all, but especially for at risk youth in the area.