By ValleyPatriot on September 30, 2021Comments Off on Specialist Matthew Pollini Memorial Fund 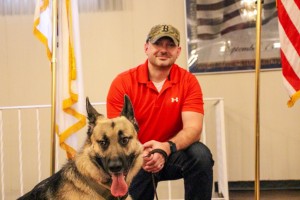 Serving those in Need – An Interview with President Michael Petterson

Kane was honored to meet Michael Petterson, president of the Specialist Matthew Pollini Memorial Fund. Kane learned the Pollini Memorial Fund is a non-profit organization created to honor the life of Army National Guard Soldier, Specialist Matthew Pollini whose selfless service to his country, community, family, and friends is remembered through continuing his mission of helping those in need. Matthew was known for putting his family first including his military family.

Matthew, a resident of Rockland, MA joined the Army National Guard, Military Police Corps at the age of 18, in October of 2005. Michael explained to Kane that Matthew joined the Guard after watching the mission of the National Guard during Hurricane Katrina. Michael said, “This is who Matthew is at his core, someone who helps people.

“Specialist Matthew Pollini deployed in support of Operation Iraqi Freedom with the 772nd Military Police Company, Massachusetts Army National Guard. He was assigned to 3rd platoon, 1st squad B-team as a gunner. Michael who served as his Staff Sergeant reminisced on how Matthew kept the morale and motivation of the soldiers high through his caring nature and sense of humor that was appreciated by his fellow soldiers. Michael explained to Kane that his personality was vital to the squads success especially on long challenging days.

Specialist Matthew Pollini died during a vehicle rollover incident on January 22, 2009 while returning from mission near Forward Operating Base (FOB) Delta in Al Kut, Iraq at the Age of 21. Immediately after his passing, Michael Petterson and his soldiers created the Specialist Matthew Pollini Memorial fund to serve as a continuation of his life’s purpose, to serve those in need. The mission of the Fund is to assist victims of natural and man-made disasters, and to assist military members and first responders that have been seriously affected by occupational hazards.

Michael Petterson explained to Kane that he, the Pollini family, fellow soldiers, and members of his family have been running events for 11 years. Most recently was the July 24th Pollini Motorcycle Run very well attended by the community. On October 3rd, 2021 will be the 6th Annual Specialist Matthew Pollini 5K Ruck and Run starting at Lenzi’s in Dracut. It is well known in community circles that owner Mike Lenzi is a strong supporter of Veterans.

Mike explained to Kane that he and his soldiers decided to add the Ruck and Run as an event since many community members wished to participate in a fundraiser but didn’t have a motorcycle for the bike run. Mike said, “Rucking is something familiar to military members and has had a positive response and attendance.”

Kane told Mike he gets it; he is also stuck at home when his humans go off on the motorcycle. That doesn’t seem fair. However, rucking he loves and gets to go! In fact, he starting training for the Ruck and Run two weeks ago.

He thinks this would be a great place to meet other people and if you would like you could run. Sometimes Kane runs but he doesn’t like it when bugs go in his mouth.
Kane also learned besides the Motorcycle Run and the Ruck and Run, there is a scholarship fund set up in memory of Specialist Michael Pollini presented to a high school senior at Rockland High School. Candidates for the scholarship write an essay on teamwork, leadership, and selfless service. The winner of the scholarship is selected by the Pollini family. Kane also attends school but doesn’t write essays. He is supposed to sit, stay, and not stare at other dogs. Two out of three isn’t bad.

Kane noticed that Michael Petterson enjoyed talking about the numerous military members and first responders the Specialist Matthew Pollini Memorial Fund had assisted. The list was endless including immediate transitional housing after a fire, clothing assistance, and food assistance. Other examples include support in Lawrence / Haverhill after the recent gas explosion. Mike explained what he likes most is that the fund provides immediate assistance, when the need is greatest.

Kane thinks Michael Petterson and his team are very special people, but he kept that to himself because Mike is humble and emphasized he wanted Kane to write about Specialist Matthew Pollini. Carrying out Matthew’s life purpose of doing for others is front and center and to be emphasized. If you would like to donate to the Specialist Matthew Pollini Memorial fund, volunteer, or attend an event, this is how you would get in touch.

So come Out and Ruck with us on October 3rd at Lenzi’s in Dracut.
Kane wanted to say until then, “Go Ruck Yourself’ but was told that wasn’t appropriate. ◊