By ValleyPatriot on February 5, 20142 Comments 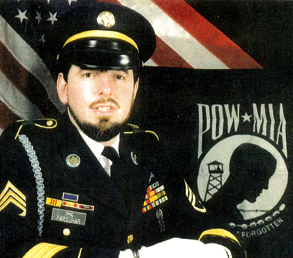 They called it “the Valley of Death”—the dreaded Hiep Duc Valley in Vietnam. The enemy’s stronghold. A major battleground. One where American units were nearly annihilated. Sergeant Dudley H. Farquhar, A Troop, 1/1st Cav, Americal Division (23d Infantry), as a member of Americal’s Reactionary Forces was sent in with their mobility and firepower to aid embattled troops.

He served in Vietnam from January through December 1970. “Handwritten on our helmets were: ‘Yea, though I walk through the valley of death, I will fear no evil…’ I will overcome evil!’ But truthfully, the enemy controlled that valley,” he said.

“More than once we got trapped inside and had to shoot our way out. One time we nearly ran out of ammunition! If it hadn’t been for the heavy air strikes by Air Force and Navy bombers, we wouldn’t have made it out!” said the Newburyport native who has lived in several Merrimack Valley towns, and now lives in Winthrop.

“The Hiep Duc Valley was the perfect kill zone. The U-shaped valley has only one entrance—the one way in is the only way out. Steep, heavily forested mountains surround the valley on three sides— covered with triple-canopied jungles. The enemy’s heavily reinforced bunkers, dug deep in the mountainsides, are totally camouflaged. Invisible from land or air. They would lure our armored personnel carrier and tank units into this valley, then seal off the one escape route as we tried to leave, attacking us with mortars and rocket-propelled grenades. You could not see them—but they saw you! We were caught in a cross-fire.” 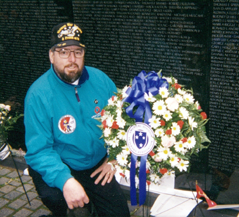 Dudley was stationed at Americal’s base in Chu Lai in I Corps, the northernmost tactical military zone in South Vietnam. Strategically, I Corps was the most important zone. It bordered the Demilitarized Zone (DMZ) separating South Vietnam from Communist North Vietnam. It was close to the Ho Chi Minh Trail.

It was also the most difficult to protect not only because of its size (10,000 square miles) but also its terrain. On the west lay Laos, where jungle-covered mountains hid supply bases of the North Vietnamese Army (NVA) and Viet Cong guerrillas. On the east were the flat, wet coastal plains covered by rice paddies extending to the beaches and the South China Sea.

“We would cover all of I Corps, park our track vehicle and then send out foot patrols. Our search and destroy missions usually lasted from 30 to 45 days—routing the enemy, searching for rice and weapons caches. Our only outside contact was through airdrops by choppers that brought in needed supplies and “medevac-ed” the wounded and KIA.”

The Americal, the Army largest division in Vietnam, fought side by side with the Marines in I Corps, later taking over after the Marines left the area.

When Dudley drove the “point” track or lead armored personnel carrier, his “Kit Carson” scout, named Cau, was an NVA defector who knew exactly where the NVA had planted land mines, and warned Dudley in advance—as a result, saving a great number of American lives. He had deserted the North Vietnamese Army and rallied to the Americans through the program “Open Arms” (“Chieu Hoi”). Formerly the paymaster for an entire NVA division, he defected when the NVA killed his whole family after denying him leave for the birth of his first child.

“Not all our men trusted him but I did. He earned my trust. For three months, he sat on top of the track next to me and warned me in advance of land mines. Our demolition teams would then go out and explode them. The secondary explosions confirmed his word.

“As sergeant, you must discern not only whom you can trust, but with what. Survival in combat means focusing on the present moment. If you get distracted, that’s when the will enemy get you.”

Descended from a Scottish clan known as warriors, Dudley Farquhar got bored when stationed in Germany, and volunteered, at first unsuccessfully, for Vietnam—finally writing to then-Senator Ted Kennedy for his help. His great grandfather, Ira Dudley Farquhar, U.S. vice-consul in Barcelona, Spain, during WWI served in WWII as Major, U.S. Army, Military Intelligence. His uncle, Michael Farquhar, served as Company Commander of a 101st Airborne unit in Vietnam.

From earliest childhood, Dudley has been an “overcomer.” Raised by 15 different foster families, he finally found a loving home with Buddy and Joyce Clark, of Merrimac, who shaped his values and modeled a life of giving and service to others.

While in Vietnam, Dudley contracted malaria, his fever spiking to 106.5 degrees. Direct exposure to Agent Orange penetrated his system through open sores and wounds and lay dormant until it resulted in end-stage liver disease, diagnosed in March 2011. He received a liver transplant in September 2012, after 15 months on the wait list.

A promise to God—a vow fulfilled

One horrific memory still sticks in Dudley’s mind. “It was March 18, 1970. We were out on patrol. Four of our men were blown to bits. Totally unidentifiable. I had to go out with a few others to gather their remains into body bags. I’ll never forget that date…

“It was in Vietnam that I found myself talking to God,” says Dudley. “I promised Him, ‘God, get me through this, and when I go home I will become a changed man. I will serve others.’ ”

The Lord answered his prayer. And Dudley kept his promise.

In the more than 40 years he’s been home, he has worked tirelessly as a national advocate for veterans—POW/MIAs and families, homeless veterans, veterans in VA hospitals, soldiers in Afghanistan—and children in shelters. During his 34 years with Lucent Technologies, North Andover (formerly Western Electric and AT&T), he was one of the youngest elected chapter presidents of the Telephone Pioneers, the prestigious charitable group founded by Alexander Graham Bell. Through his tireless efforts he has touched numerous lives for the good. For him, it’s purely a labor of love. 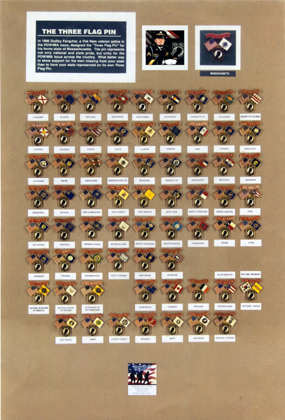 A few of his projects since returning home:

• Operation TRIUMPH (“To-Return-Immediately-Unauthorized-MIAs-and-POWs-Homeward”), to raise public awareness and pressure government officials for a full accounting of the nearly 2500 yet unaccounted for, and specifically the 64 missing Massachusetts men…

• POW/MIA Bracelets, his first project in the 1970s, gave hope to then-POWs that America had not forgotten them…

• Northeast Family Institute’s shelter for troubled boys, where Dudley, as project chairman for 27 years, brings joy and hope into their lives.

Dudley survived for a purpose. He has turned every misfortune into an opportunity to serve and bless others.

Jesus said: “…whoever desires to become great among you, let him be your servant…just as the Son of Man did not come to be served, but to serve, and to give His life a ransom for many” (Matthew 20:26, 28).