By ValleyPatriot on January 29, 2019Comments Off on Staff Sergeant Robert Belleau ~ HERO IN OUR MIDST, VALLEY PATRIOT OF THE MONTH 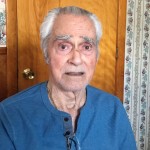 Dracut’s Robert Belleau is one of the many US Military Veterans in the Merrimack Valley of French Canadian heritage. He joined the new US Air Force, (formed out of the US Army Air Corps shortly after World War II) partly out of patriotism, and partly, (his words) to avoid having to serve three years in the US Army.

He was a Crew Chief for a North American F-86 Sabre, the United States Air Force’s first swept wing fighter. North American built 6,297 F-86 Sabre Fighters. Robert was very proud to serve on one of the planes, in charge of the planes maintenance, and equally proud of the highly trained and high quality pilots he served with, such as, Captain Charles Oldfield and Major George Gleason. Staff Sgt. Belleau spoke at length to me of Captain Oldfield piloting his Sabre through a nuclear test, to determine, simply, if the plane would survive. During his time in the US Air Force, he held a Top Secret Clearance and with additional Quebec Project clearance. Staff Sgt. Belleau is bilingual, speaking, reading, and writing in French and English. During most of his time in the US Air Force, he was posted at Kirkland AFB in Albuquerque, New Mexico.

His Air Force unit, the 4925th Test Group, assigned to Operation Teapot, which was a series of fourteen nuclear test explosions conducted at the Nevada Test Site in 1955. The mission of the US Air Force personnel assigned was to establish military tactics for ground forces on a nuclear battlefield and to improve the nuclear weapons used for strategic delivery.

The research started with the first nuclear test on February 18, 1955, code name “Wasp”, and ending with the last in the series on May 15, 1955, with the more mundane name of “Zucchini”. Operation Teapot was preceded by the wider known tests on Bikini Atoll, called Operation Castle.

Following Operation Teapot, there was an even lesser known test of the coast of San Diego, California; Operation Wigwam conducted a month after Teapot ended.

While looking at Mr. Belleau’s nearly 70-year-old USAF Meal Pass, he spoke to me in his home on his military service. Listening while he praised the leadership and guidance of his non-commissioned officers, men like Master Sgt. David Todd, I thought of the effectiveness of the American military at molding our nation’s youth. At the Dracut Legion, many a Veteran has a great story or two they tell of a US Military NCO, and how that Sgt. or Petty Officer molded them into the man or woman they are today. 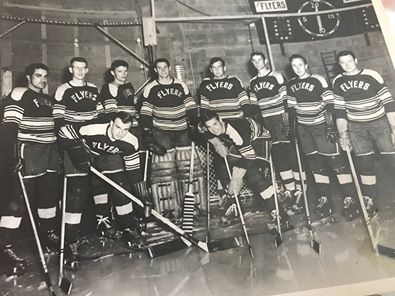 He shared a photo of the unit’s Kirkland AFB Ice Hockey Team; Robert is the player on the far left, playing Left Wing. His eyes sparkled while he told me about playing hockey with his fellow Airmen. Many of these hockey teammates were also young Americans, with immigrant French Canadian parents. The Manzano Mountain Hockey League consisted of teams from several US Military bases.

According to Global Secuity.org, the Armed Forces Special Weapons Command constructed two operational sites after World War II. One was known as Site Able, located in the foothills of the Manzano Mountains, just east of Sandia Base.

The other base was Site Baker near Killeen, Texas. Construction on Site Able started in 1946, with the first operational facilities activated on April 4, 1950. Although activated in 1950, construction on the major facilities was not finished until 1961. On February 22, 1952, Site Able was renamed Manzano Base, and operated by the Air Force, while Site Baker was renamed Killeen Base and turned over to the US Army.

Now 85 years old, for the last 80 years living in Dracut with his family. His dad was a veteran, serving in a US Army Calvary Unit. He and his wife Jacqueline, raised two sons, now 55 and, 59, both parents and sons were very involved with Lowell’s Boy Scout Troop 7. Robert and his wife also have three grandsons.

Robert is a member of the Korean War Veterans Association, the American Legion, and the Disabled American Veterans.

These groups serve a very important purpose; they lobby, both formally and informally, with our elected officials to protect the rights and benefits of active duty service members, reservists, Veterans, and military retirees.

Both Robert and I are asking the Valley Patriot readers, to join a Veteran’s Organization, if eligible, or to consider purchasing a membership for an eligible family member, perhaps as a gift. Of roughly 132 million Americans, living in 1945, 16 million served in World War II. Today, of 325 million American citizens, 1.4 million are serving on active duty, and nearly 1 million in the reserves and National Guard. These numbers clearly illustrate the need for service members and Veterans to join one or two of the Veteran’s groups they are eligible to join.

Your brother and sister Veterans invite the Valley Patriot readers who are Veterans, down to the Dracut American Legion on the 3rd Saturday of the month at 1pm to see what we have to offer. We also have several other Veteran’s organizations that meet at the Post.

Please attend a Veteran’s Social hosted by the Nam Knights on January 26th at 7pm at the Dracut Legion.

John Cuddy served in the US Navy’s Construction Battalions (known as the Seabees) after retiring from the Navy; he used his GI Bill and earned a BA in History and an MA in Economics from the University of Massachusetts on the Lowell Campus. He has been employed in Logistics at FedEx for the last 21 years. If you know a World War II Veteran who would like their story told, please email him at John.Cuddy@Yahoo.com. ◊