By Tom Duggan on June 23, 2015Comments Off on State Auditor Bump on Balancing Work, Leadership and Laundry 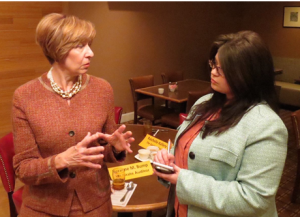 NORTH ANDOVER—Massachusetts State Auditor Suzanne Bump is the first female to serve as Auditor in the Commonwealth’s history, and she spoke frankly about her experiences at the Merrimack Valley Chamber of Commerce’s “Women in Business Series” last month.

Members of the Chamber fielded questions as last minute attendees checked in. Servers carefully made their way through a maze of local leaders and business cards. I was relieved when the Auditor dabbed on some coral lipstick—something so normal that I suddenly realized I had never seen at political events.

Chamber board member Kimberly Abare introduced Bump, who smoothed out her suit and stood up in one motion. The Auditor said Chamber President Joe Bevilacqua asked her to tackle the elusive question: how do you achieve work-life balance? She paused again to put on a pair of thin black glasses, and looking over the top of them she admitted, “FRANKLY I don’t really know that [my] scales ARE at equilibrium…I don’t have work-life balance…I’m not able to do these things because I’m a superwoman, I’m able to … because I have support.” This refreshingly honest answer to a question that’s been haunting women since the ‘70s was followed up with practical advice for helping us succeed: let go of some traditional gender role expectations and be happy.

She advises women to let go of the pressure of “work-life balance” to be successful. She looked thoughtfully into the crowd and said, “One of the reasons that I’m standing in front of you today is that for 25 of 35 years [my husband and I’ve] been married, he has done the laundry!”

Bump admitted she wasn’t born a public speaker: “When I stood to speak in public my legs were shaking…it wasn’t a pretty sight…but when I looked at the other candidates …I decided no one was going to do the job the way that I would.” She sadly remembered that 20 years ago she thought elected women would have caught up by now. She seemed exasperated because only 17% of Congress are women: “And it’s not because we don’t run, or we can’t win!” she added. She described how different from men women’s feelings are about guilt, taking bold risks, and the number of times it takes to successfully encourage a woman to run for office.

In a private interview after the event I remarked to the Auditor: “You know, it was powerful to hear you say that you haven’t figured out work-life balance!” and we both chuckled. Women often feel the pressure to be a great leader, a provider, a wife, a mother, a caretaker to parents, a homemaker, to be involved in the community, and that’s a lot of pressure. Auditor Bump referred to these expectations as an, “Artificial construct [and that] you need to find your own equilibrium…there’s no magic equation.” She advised women to set priorities, only give yourself to what you want, your own responsibilities, not necessarily what you think is expected of you. “Make sure one of those priorities are to keep yourself happy and healthy,” she added.

Something that isn’t often discussed is that despite initial supports for becoming a female leader, there are a lot of barriers for women, and it’s not only pay inequality or getting elected in the first place. A whole new set of issues arise once you do make it, a struggle against an unspoken different set of rules. Her answer to this was simple: mentors. “You want to find out what the unwritten rules are…Generally men focus on using their strengths to overcome their weaknesses, while sometimes our nurturing nature can make us more focused on fairness or merit [which can end up holding women back].”

Usually you can catch folks checking the time towards the end of a political speech, but I didn’t spot any as Auditor Bump added, “You can continue to lament the fact that there aren’t more women on boards, in corporations, or that there aren’t more women in leadership positions, OR you can really do something about it…mentor women…assist women…encourage women to run for office!”

Jessica Finocchiaro is Vice Chair of the Gr. Lawrence Technical School representing Methuen, and serves on various community boards in the Merrimack Valley and statewide. She works as a Realtor® at Century 21 McLennan & Co. and holds Masters of Government and Public Administration, both from Suffolk University. Jessica can be reached at (978) 566-1786, or online at JessicaForMethuen.com, Facebook/Twitter: @JessFinocchiaro.