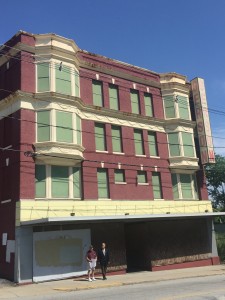 The Haverhill non-profit Coalition for a Better Acre has been awarded funds from the state to build 44 units for veterans and families in the old Gerson Building.

The Gerson Building has been an eyesore and added blight to the neighborhood, this new development will be a welcome change to the area.

Randy Carter, Project/Program Manager of Veterans Northeast Outreach Center (VNOC) said that the idea came from John Ratka – the Executive Director of VNOC – when they first went to the city looking for funding. Carter says that the veterans housing will be a run jointly between VNOC and Coalition for a better acre. He also said that he is hoping the project will be completed by 2019.

VNOC Executive Director John Ratka told the Valley Patriot that it took a lot of people to make this happen.

“We are so thankful to the mayor, city council, zoning board of appeals, all city departments, and the resident of the city for their support of this housing project.”

Ratka said he was particularly grateful to Governor Charlie Baker and Secretary of Veterans Services Francisco Urena, as well as several other state agencies for recognizing the critical need for approval of veterans housing projects like this.

The Gerson Building was used for decades as a local furniture store.

It has been vacant for many years and this new development will not only add housing for veterans and families, it will add economic development to an area that was dormant and has now been on the rise in recent years.