By ValleyPatriot on June 2, 2014Comments Off on State, Fed and Local Task Force Intercepts 11 Kilos of Cocaine Shipped in Produce Boxes from Dominican Republic, Headed for Lawrence 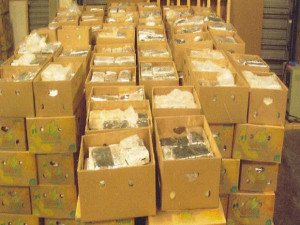 Several days ago, Massachusetts state troopers along with federal agents and local police officers developed intelligence that a large quantity of cocaine was en route from the Dominican Republic, through Florida, to Lawrence, Mass. The intelligence indicated that the cocaine was secreted between the walls of cardboard boxes that contained various types of produce.

On Saturday, a task force of federal, state, and local officers set up surveillance of a produce. warehouse at 1 Broadway Street in Lawrence. The surveillance continued all day, throughout the night, and into Sunday. At approximately 9:30 a.m. Sunday surveillance teams observed the produce business’s owner, MIGUEL BETANCES, 60, and another man, later identified as FRANCISCO GONZALEZ, 50, pull up in a sport utility vehicle and enter the building. At around 11:40 a.m., BETANCES came out of the warehouse and backed his Toyota Highlander up to a loading dock. Both men were observed loading items into the back of the SUV.

The men then drove away in the SUV, at which time several units from the State Police Troop A Community Action Team converged on it and stopped it. A search of the vehicle yielded numerous packets of a substance believed to be cocaine concealed within two produce boxes. Simultaneously, task force officers executed a search warrant at the produce business, which was unoccupied. After securing the premises, a systematic search of nearly 600 boxes of produce revealed numerous additional packets of cocaine concealed within hiding spaces between walls of the boxes.

In all, the total weight of the suspected cocaine was approximately 11 kilograms, which holds an estimated value of over $500,000.

BETANCES and GONZALEZ were placed under arrest and transported to the Lawrence Police Station, where they were booked on charges of trafficking a Class B substance in excess of 200 grams and conspiracy to violate the Controlled Substance Act.

No further information is being released at this time.

State, Fed and Local Task Force Intercepts 11 Kilos of Cocaine Shipped in Produce Boxes from Dominican Republic, Headed for Lawrence added by ValleyPatriot on June 2, 2014
View all posts by ValleyPatriot →