Methuen police say they have arrested one man in connection with yesterday’s day log search of 74 Elmwood Road where two unlicensed handguns were found.

Earlier Saturday afternoon Methuen Police arrested 30 year old Kerwin Gomez a resident of the Elmwood Street home. Police sources also say he was present at the Sahara Club last week when of 29 year old David Rivera was gunned down execution style as he was leaving the club.

Yesterday Police Chief Joe Solomon said that the personal affects of murder victim David Rivera were also found in a bedroom on the first floor of the home and that it was apparent that Rivera had been living there.

Gomez was charged with two counts of possession of a firearm without a license. The unlicensed weapons seized by police were described as a 45. caliber semi-automatic pistol and a 40. caliber Taurus semi-automatic handgun.

Gomez is unemployed. Police say he has a record with “some violence” in his past. One police source said they do not believe he is involved with the murder of David Rivera other than being a witness.

Massachusetts State Police Detectives, the Methuen Police and the Essex County District Attorney’s Office are conducting a joint investigation into the murder of Rivera. Police sources told the Valley Patriot yesterday that several occupants at the Elmwood Road home yesterday were also witnesses to the murder including the girlfriend of the murder victim.

Anyone with information about the execution style murder of David Rivera is encouraged to call The Massachusetts State Police or the Methuen Police at 978-983-8752.

Methuen Police Chief Joseph Solomon stated late Friday evening that the personal belongings of murder victim David Rivera were found in the home of 74 Elmwood Road this evening. State Police, Methuen Police and The Essex County District Attorney’s Office secured the house and obtained a search warrant after two guns were found at the home during a call over a fight.

“There was one bedroom that contained Mr. Rivera’s clothes and personal belongings. The house was equipped with an alarm system and a CCTV camera system,” Solomon said in an exclusive interview with The Valley Patriot. “Several of the subjects at the house today were present at the Sahara Club when Mr. Rivera was shot. At this time all who were on the scene today denied living at the home. The two guns that were seized were taken by the Massachusetts State Police Crime Investigators for weapons testing.”

Police officials say that the search of the home is  in connection with the execution style murder of David Rivera at the Sahara Club earlier this week.

Rivera hailed from Lawrence. He was 29 years old.

Rivera was executed outside the Sahara club by men laying in wait in a black vehicle as he was leaving the Methuen Night Club.

Methuen Cops discovered two weapons in the home, one a .45 caliber handgun, the same caliber handgun as was used to execute David Rivera. A Black Mercedes is in the driveway. 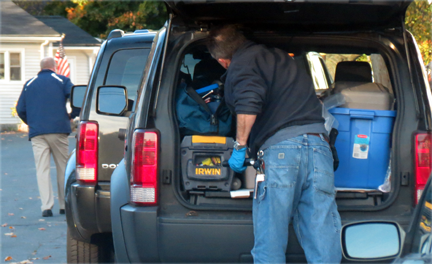 State police detectives and Methuen Police officials were scene removing bags and boxes of evidence from the home at approximately 6pm Friday evening.

Neighbors say they have called police frequently because of suspected drug activity at the address. Witnesses also confirmed that several people appeared to be living in the house as if it was a rooming house.

The search resulted from a call that went in to the Methuen Police about a possible fight at Elmwood Road this afternoon.

Neighbors say that when police arrived they could hear yelling inside the home and entered to quell the disturbance.

Law enforcement officials say that when they did enter the home they recognized several witnesses from the Sahara Night Club Shooting and searched the house for firearms as a safety sweep.

One police source told the Valley Patriot that they recognized the murder victim’s girlfriend in the home and one of the occupants were pointed out by a witness as someone who had broken into the house moments earlier causing the disturbance.

Police waited most of the day for a judge to sign a search warrant for the home.

He is being held in custody at this hour.

Methuen Police Chief Joe Solomon did arrive at the scene early this evening and stayed for only five minutes when officers at the scene alerted him that a reporter was taking photos.

Solomon said that he could not comment as it was an ongoing investigation and referred all media requests to the Massachusetts State Police Detectives division.

Solomon also would not comment on the status of Marcos Rizzo other than to say he was in custody and would be issuing a press release shortly.

Officers from the Massachusetts State Police and The Essex County District Attorney’s Office were still on scene shortly after 7:3opm. One officer was overheard saying that they were going to have a very long night searching the house evidence.