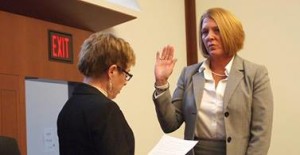 Suffolk Register of Probate Patricia Campatelli of Boston has paid $10,000 to the state’s general fund to resolve several campaign finance issues, according to a disposition agreement between the candidate and the Massachusetts Office of Campaign and Political Finance (OCPF).

According to the agreement, the Campatelli Committee did not comply with several aspects of the campaign finance law in 2012 and 2013, including the requirements for the timely disclosure of receipts, accurate recordkeeping and the prohibition on personal use of campaign funds.

· The committee made approximately $10,000 in expenditures using the candidate’s personal funds and personal debit and credit cards outside of the candidate’s depository checking account. The campaign finance law requires depository candidates, including candidates for Suffolk Register of Probate, to make all expenditures with their campaign checking accounts or with committee credit cards.

· The candidate used $600 in committee funds for personal purposes.

· The committee made more than $9,000 in wire transfer payments to Verizon and Capital One in 2012 and 2013. Wire transfers are prohibited, except when used for payroll or media services.

· The candidate or another authorized individual made expenditures on behalf of the committee that resulted in a negative balance in the bank account in September of 2012, and in January and November of 2013.

· The committee did not file timely deposit reports disclosing contributions on 20 occasions.

· The committee did not file deposit reports disclosing and itemizing $1,500 in contributions.

· The committee failed to accurately disclose receipt information for at least six contributions, totaling $1,300. Four of those contributions ($900) were from prohibited business entities.

· The committee was unable to produce receipts or other records for numerous expenditures.

The agreement was signed by Campatelli and OCPF Director Michael J. Sullivan. A copy of the agreement is available on OCPF’s website at www.ocpf.us.