By Tom Duggan on August 28, 2007Comments Off on Sullivan Gets State Approval for Budget Renders Blanchette, City Council Irrelevant

Lawrence Mayor Michael Sullivan marched into city hall Thursday night to a packed city council chambers. Hundreds of police and firefighters crowded the hall bearing signs that chastised the city council for trying to cut public safety in the city. 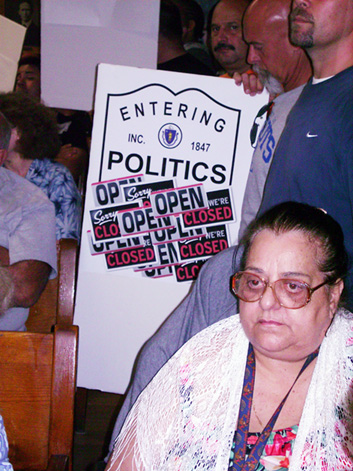 Mayor Sullivan took to the podium after city councilor Grisel Silva read a statement attacking the Sullivan administration and stating that police and fire don’t need to be cut citing vaguely that other there were other places in the budget to cut. She stood steadfast in her recommendation to cut 3.7 million dollars out of the city budget which would have decimated city serves.

Sullivan then spoke at the microphone telling a shocked and obviously dismayed city council that, after meeting with them “for more than 60 hours” over the proposed budget and given that the council did not take “effective action” on the submitted FY08 spending plan, “I have been in touch with the department of revenue and they are in total agreement that the June 3rd operating budget, which I submitted to you is now the adopted budget for the city of Lawrence for Fiscal Year ‘08. We have an opinion form the city attorney who is also in agreement on that,” Sullivan said.

“The submission of the June 3rd budget is the spending plan that has been approved based on insufficient action that was taken on that June 17th rejection [of the budget].

“So tonight is a good night. Tonight, I am telling the city council we have an operating plan, and we will work day in and day out to make that operating plan work.”

Sullivan urged the council to approve the budget and finance director nominee he has submitted saying he needs someone to help implement his spending plan.

“So, I’m here to tell you that this meeting can be adjourned, that the budget we have been working has been approved, and now I ask all the hard working city employees that are behind me to leave with me and let’s all get back to work!”

As Sullivan turned to leave the police and firefighters filed out behind him leaving the council chambers nearly empty. 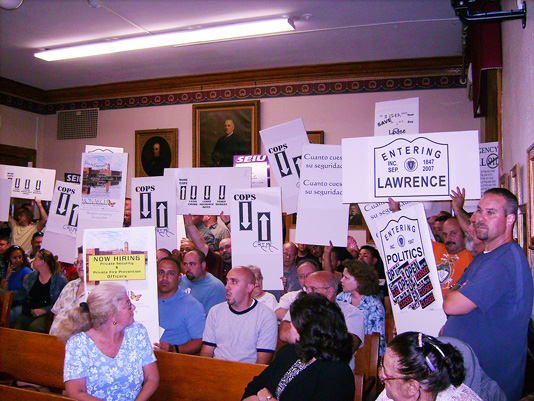 Councilors Nunzio DiMarca was furious, speaking after the mayor had left saying he disagreed with the mayor and the Department of Revenue, listing all of the same political charges he had at every previous meeting. DiMarca whined on and on attacking the mayor and desperately trying to be relevant.

The city council is vowing to fight in court so they can cut the city’s operating budget by $3.7 million effectively closing one fire station and laying off police and fire fighters. According to a letter from the Department of Revenue (and confirmed by city attorney Chalie Boddy), the city of Lawrence is now operating on the original budget submitted by Mayor Sullivan. Because the city council did not reject each department’s budget, line item by line item, they have effectively taken no action within the required 45 days, putting into effect Sullivan’s spending plan.

The Valley Patriot spoke with two officials from the state who confirmed that the Department of Revenue’s ruling in favor of Mayor Sullivan’s $42Million budget is legally sound and will stand up to any court scrutiny. Sources also said that conversations between Mayor Sullivan’s office and the governor’s office, as well as the Attorney General’s office have been taking place throughout the week. “The state is on board with this,” one source said. “They realize the insanity this city council has put the mayor through just to keep the city going day to day, and believe me when I tell you, they know what has been going on here and they want this over with. The city council is an embarrassment to the city. They were really going to lay off cops and firefighters. They were really going to shut down our parks and leave DPW stranded. They have no regard for anything other than getting re-elected. Let’s see how they do with this one on election day.”