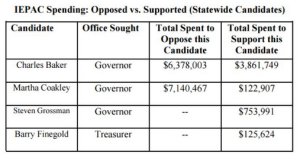 Independent Expenditure “Super” PACs and other independent groups spent $20.4 million in the 2014 election, according to an OCPF review of disclosure reports filed by those entities. It was the first statewide election in Massachusetts in which Super PACs played a role.

The total in 2014 is twice the amount spent by independent entities in the last statewide election in 2010, when $11.5 million was reported.

More than half of the 2014 total, $11,012,216 was spent to benefit the gubernatorial winner, Republican Charles Baker. A total of $6,926,733 was spent to benefit the Democratic candidate Martha Coakley. The remaining funds were used for other statewide and legislative races.
Independent committees and groups spent more to support or oppose the party finalists for governor than the candidates spent themselves. Baker’s campaign reported $5.6 million in expenditures and $1.2 million in in-kind contributions.

Coakley’s campaign spent $3.9 million and received $2 million in in-kind contributions.
Almost all of the in-kind contributions came from the state parties for each candidate.
Independent expenditures are made to support or oppose candidates without coordinating with their campaigns. Super PACs (IEPACs) accounted for most of the independent spending in 2014, $19.2 million. Groups that are not political committees and spent money from their general treasuries reported an additional $915,970 in independent expenditures.

Most of the spending was done by two Super PACs: the Commonwealth Future IEPAC and the Mass IEPAC. Commonwealth Future reported $10.4 million in expenditures to benefit Baker, with $10,770,000 in receipts. All but $20,000 of the receipts was from the Republican Governors Association.

The next highest spender was the Mass IEPAC, which supported Coakley with $6,253,003 in expenditures. The Mass IEPAC raised $7 million from the Democratic Governors Association, Emily’s List MA PAC, labor unions and individuals.

All reports by Super PACs and independent groups are available on the OCPF website by clicking here.

Super PACs originated in 2010 after two court decisions. In the U.S. Supreme Court’s Citizens United vs. FEC decision, the court ruled that independent expenditures by corporations that are made to influence candidate elections cannot be limited, because doing so would not be consistent with the First Amendment.

The second court decision, SpeechNow.org vs. FEC, held that individuals, corporations and other groups can provide funds without limit to independent expenditure-only committees (Super PACs). This decision was made by the U.S. Court of Appeals in D.C. Massachusetts Super PACs are required to file campaign finance reports shortly after making an expenditure to support or oppose a candidate or candidates. The reports also disclose information about contributions to the Super PACs.

Super PACs were also required to file year-end reports, due by Jan. 20, 2015, disclosing all expenditures and receipts, including administrative costs for such things as consulting and legal expenses.