By ValleyPatriot on April 26, 2021Comments Off on ‘Superman & Lois’ ~ TV TALK with BILL CUSHING 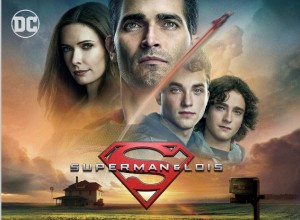 I have stayed away from the overwhelming deluge of superhero shows that have appeared on TV and streaming services in recent years because I felt like they’ve gotten out of hand. Too much, too fast. But when I saw a new Superman series was coming, I decided I would give it a try. I’ve always been a big Superman fan and wanted to see what this would be like. So far, I haven’t been disappointed.
‘Superman & Lois’ premiered on the CW on March 23, 2021 with an interesting premise.

After years of fighting crime in Metropolis and becoming the world’s most famous superhero, Superman a.k.a Clark Kent and his wife, the world-famous journalist Lois Lane are still working at the Daily Planet. Their teenage twin sons, Jonathan and Jordan, are high school students. Jonathan is a confident and popular student athlete while Jordan is a loner that suffers from anxiety. Neither of them knows their father’s secret.

The death of Clark’s mother causes the family to return to his hometown of Smallville, KS, where Clark reunites with old friends, including his old girlfriend Lana Lang Cushing. While home Clark and Lois soon learn that Clark may not be the only one with special abilities. Their son Jordan has shown some signs of having some powers as well. This eventually leads to Clark’s secret being revealed to his sons and the family decides that it would be best for them to give up their lives in Metropolis and stay in Smallville, where they could live a quieter existence.

The Kent boys now face their own challenges like coming to grips with the idea of who their father really is, and also other normal teenage stuff, like adjusting to a new school, making new friends, etc. Jordan Elsass and Alexander Garfin hand in noteworthy performances as Jonathan and Jordan, respectively.

The impressive cast also includes Tyler Hoechlin as Clark/Superman and Elizabeth Tulloch as Lois Lane. Both do a great job with their roles. Hoechlin is a terrific Superman, and Tulloch plays Lois with the toughness that we’d expect from a big city reporter, plus the compassion and understanding that it takes as the wife of a superhero and the mother of two teenage boys. Emmanuelle Chriqui (Entourage) as Lana, does a nice job. Dylan Walsh is also a worthy addition as Sam Lane, Lois’s military father, who has known Clark’s secret since the beginning.

The youth cast is also quite good. Along with the aforementioned Jordan Elsass and Alexander Garfin as the Kent boys, Inde Navarrette is very good as Sarah Cushing, Lana’s daughter. It’s nice to see teenage characters that look and act like actual teenagers for a change.

This series has a bigger budget than all of the other CW Superhero entries, and it shows. The visual effects of ‘Superman & Lois’ are top notch.

For me, what separates this version of Superman from all the others that have come before it, is that we really haven’t seen this story before. We haven’t seen Superman and Lois be struggling parents before and because of that, we’ve never realized that Superman would probably be a pretty crappy Dad who’s never around. We haven’t seen Lois struggling to maintain a normal life for her two sons while her husband is off saving the world. ‘Superman & Lois’ shows us that side of the story along with some of what you might expect.

Superman might be faster than a speeding bullet, and be able to leap tall buildings in a single bound, but the Man of Steel can be just as human as you or me. Superman’s humanity and dealing with very human issues is what makes ‘Superman & Lois’ shine.
‘Superman & Lois’ airs Tuesdays at 9 on the CW.

If you have any questions about TV you can email me at BillsTVTalk@gmail.com. I will answer all of your questions and will feature some of the questions I receive in a future Mailbag column. Follow me on Twitter @BillsTVTalk and on Facebook at BillsTVTalk for daily up-to-the-minute TV news and discussion.◊