By Christine Morabito on April 10, 2013Comments Off on Tax Day Rally “Unburdening the Next Generation” 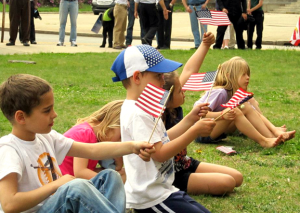 Please join the Tea Party and other liberty-minded groups as we gather on the Boston Common April 13. The Parkman Bandstand will be rocking with live music from starting at noon from People’s Blowback, and then a variety of speakers from 1-3 p.m.

The theme is “Unburdening the Next Generation” which underscores our concern for the legacy of debt we are leaving our children and grandchildren. We started this movement because we felt the frustration of being Taxed Enough Already. Governor Patrick and the Massachusetts legislature apparently did not get the memo, because they are currently considering raising our taxes by $500 million. More spending, more demands on the taxpayers and no common sense reforms in sight.

Government spending and borrowing is out of control and the country is now $16 trillion in debt and counting. The Tea Party is criticized for disagreeing with President Obama on, well, everything. We actually agree with Obama on many things he says. However, what he does is another story entirely. For instance, in 2008, when the national debt was only $9 trillion, the president said, “To take out a credit card from the bank of China, in the name of our children … that’s irresponsible, it’s unpatriotic.” The Tea Party could not agree more.

We are expecting large crowds on the Common to send a message that government must learn to live within its means just as we the people must do. Our Master of Ceremonies will be none other than Tom Duggan, publisher of The Valley Patriot and radio host on WCAP in Lowell.

Keynote speaker, Grover Norquist, President of Americans for Tax Reform, has been a champion for limited government and better stewardship of our tax dollars. Norquist will also be representing Citizens for Limited Taxation.  Dr. Keith Ablow, author and Fox News Psychiatry Contributor will have some advice for us on how to make sense of all the political madness that bombards us on a daily basis.

Joining us on the stage will be Boston radio host and columnist at the Washington Times, Jeff Kuhner, who has been heavily promoting the event on WRKO, Jeff Katz, formerly of WRKO and now embarking on a new career, and Todd Feinburg who currently fills-in for Dan Rea on WBZ and is also reinventing himself.

Other speakers at the rally will be Alexis Monahan  with Students for Liberty, Paul Craney, Executive Director of Massachusetts Fiscal Alliance, and Aaron Goldstein, Contributor to The American Spectator.

Then, for something completely different, we look forward to being entertained by local hip hop artist, Andres “DraMatik” Gonzalez as he unveils his Tea Party rap song, entitled “We the People.”

Jim Wallace, Executive Director of Gun Owners Action League will be sharing his thoughts on how we as a society, and especially our children, will be less safe if we lose the right to defend ourselves.

Recently, our very own Rep. Jim Lyons discovered that Massachusetts spent a shocking 93 million in taxpayer dollars on healthcare for illegal aliens. Jessica Vaughan, Director of Policy Studies at the Center for Immigration Studies will discuss how this kind of activity is bankrupting our state and how  our children will suffer the consequences.

East Walpole baker, Andrea Taber burst onto the political scene when she protested accepting EBT cards as payment for her “luxury” whoopie pies and pastries at the Braintree Farmers Market.  The “Whoopie Pie Lady” has since started her own political movement called the Common Sense Restoration Project and had 75 people at her first meeting. We are proud to have her share some common sense at the Tax Day Rally.

The Tea Party seems to resonate strongly with immigrants who hail from lands with far less freedom than ours.  Jake Danishevsky is one such immigrant. Jake is a Soviet-born Jewish American and author of “After Tastes and Tales from Russia.” He will speak at the rally about the freedoms we take for granted in this country and how dangerously close we are to losing them.

For years the Tea Party has struggled to attract new members into the movement. With that in mind we have invited Ron Shaich, CEO of Panera Bread and cofounder of the non-partisan group No Labels to address the crowd about the group’s efforts to rein in government spending.

We are inviting the U.S. Senate candidates and hope you will be able to meet them all.