By Christine Morabito on December 16, 2013Comments Off on Taxation without Representation? Not with the Tea Party Around 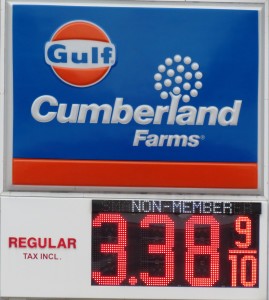 In July of 2013 the Massachusetts legislature did something both historic and fiendishly clever. When voting to increase the gas tax (not historic) they also voted to index the tax to inflation, meaning the tax will continue to rise, and rise without lawmakers having to perform the unpleasant task of voting for it.

This slick maneuver was viewed by conservatives as the epitome of “taxation without representation.” Just like the original Tea Party, the modern day Tea Party was having none of it. Limited government groups, conservative activists and Republican lawmakers joined forces to collect over 100,000 raw signatures from embattled taxpayers of all political persuasions, who have had enough of this nonsense. The goal was to give voters an opportunity to repeal the automatic tax increases during the 2014 elections.

About 87,000 certified signatures for the repeal were delivered to the Secretary of State’s office this week. That was 18,000 more than was required, illustrating the popularity of this citizen effort. The initiative is now on its way to appearing on next year’s ballot.

Not surprisingly, Governor Deval Patrick is not amused. Perhaps still stinging from the embarrassment of the Tech Tax repeal a few months ago, he is now lashing out at advocates of the gas tax repeal. Patrick said, “… I think those that are advocating that the indexing be undone need to answer for why it is they keep showing up for all the ribbon-cuttings every time there’s a new bridge or a new road project done, but don’t seem to want to participate in how to pay for it.”

While it was not crystal clear who the governor was referring to, we can safely rule out the activists and petition signers who are far too busy working and paying taxes to attend ribbon-cutting ceremonies. A reasonable person could deduce that the ribbon-cutting enthusiasts Patrick was speaking of were the several Republican lawmakers who supported the petition; his veiled threat to them: Good luck getting state funding for your district’s construction projects in the future.

During the budget debates, Beacon Hill lawmakers ignored Republican attempts to solve some of the state’s financial problems through reform efforts. Seems the lopsided legislative body was only interested in measures that would raise taxes – I mean, revenue. Patrick’s knee-jerk defense of roads and bridges is old and tired. Tax revenue is plentiful if only it were spent properly. In fact, Patrick recently announced that he will begin accepting his full salary of $151,800, having foregone some of it in previous years. He states, “We’re running a surplus. I think it’s fair.” The state did indeed end its fiscal year with a surplus of $1 billion. So, tell me again why we need to raise taxes?

The gas tax increase will disproportionately affect the poor and the elderly on fixed incomes. While I do not begrudge the governor collecting his six figure salary, if fairness was his goal, he would support tanking the gas tax because the little people cannot afford it.

If the repeal fails and this “forever gas tax” is allowed to stand, our slippery lawmakers will be given the green light to tie future legislation to inflation, as they have already done with their own salaries and are attempting to do with the proposed minimum wage increase. Like a naughty toddler acting up in the toy store, politicians should not be rewarded for bad behavior if we expect them to act appropriately in the future.

Luckily, some people are demanding politicians be held accountable. A debt of gratitude goes out to all those hard working Tank the Gas Tax activists, conservative talk show hosts and legislators who spend countless hours collecting signatures in all kinds of weather, promoting the effort on radio and television and delivering and retrieving petitions from city and town halls all across the state. This was no easy task for unpaid activists. The fact that these sometimes disparate groups were able to work so well together for the common good is worth noting.

Massachusetts drivers now pay 42.4 cents in taxes per gallon of gasoline, figuring in state and federal taxes. The prospect of this tax going even higher in the future is not sitting well with them and they are speaking out. This citizen’s petition is their way of telling their representatives that they are Taxed Enough Already. Good for you Massachusetts!

Massachusetts Gov. Deval Patrick to begin taking full $151,800 salary he is entitled to