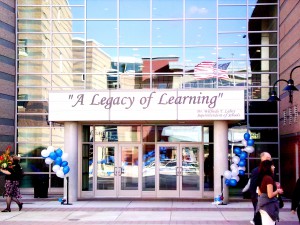 I am one of the 59 Lawrence teachers whose contract was not renewed this year. Recently, on June 11, you reported on this.

I would like to share with you and possibly your readers my experience teaching within the Lawrence Public School District. I have taught in Lawrence at two different schools during the 2012-2013, 2013-2014, and 2014-2015 school years. It is my hope that by sharing this, the public may be more aware of the experience of teachers within the district. It is also my hope that the district may in the future better support the faculty in serving students as well as notice patterns, strengths, and weaknesses in their management.

I was told my contract would not be renewed two weeks before the close of school. My portfolio had yet to be reviewed. (Every teacher in the state has to create a portfolio with evidence of four standards. This is to be reviewed by administers in April.) Three days before the last day of school, I received my summative evaluation in an email. Even though I received it June 16, it was post dated April 20. I believe this is just one of many examples of the lack of transparency and support within the school. Lack of timely feedback from the administration is a common thing in the district. Meaningful growth cannot happen without timely feedback.

Also, I have a hard time believing there is a growth mindset within the district when I was observed in March by my administrator, but only received the review of the March observation in mid-May. It was a critical review of my performance, yet it was not critical enough to notify me right away to make the recommended adjustments to better serve the students. Either my performance was misjudged, or the administrator remiss in notifying me in a timely manner of critical weaknesses in my teaching. I truly believe that my administrator has the best interests of the students in mind. Seeing that she was lackadaisical about notifying me of her review of my performance, I can only assume she didn’t truly believe that my performance was sub par.

There are many members of the faculty in leadership positions that have little experience in their positions. I understand we all have to learn through trial and error. However, it needs to be taken into account the effect it has on faculty. It is very hard to perform to expectations when the leadership team is still learning what the expectations of their own positions are and they are not all on the same page with matters of curriculum and instruction.

I find some decisions within the school seem to be ego-driven rather than child-centered.
I find that the district’s actions erode the very sense of community that they claim they are trying to build. It seems counterproductive to burn and churn teachers. Many students have transient home lives. Often the adults within the school are the adults they have the most contact with, especially with these extended school hours.

When you have a high teacher turnover and when you change the adults present in their lives, there is a loss of stability. Students and their parents are motivated to engage with the school based on their relationship and connection to the faculty. On my summative evaluation, I was commended for engaging the parents and school community.

When my contract was not renewed and I was told I was “not the right fit for Lawrence,” I understood it was a personal and not a professional decision.

I am a resident of Lawrence. I am a graduate of Lawrence High School. I attended the Bruce Elementary School in Lawrence. When I take my children to the Boys and Girls club, I see many of my students there. During Halloween, my children visit my students homes and my students visit my home for candy. It is not common in Lawrence to have a teacher within the same district and even school zone as the students. That’s something very special.

I know many staff members say nothing about their concerns because Lawrence has created a culture of silence. Faculty members have seen the large turnover within the district over these recent years and they’re concerned with their own job security, retirement, and career paths.
More than one teacher has said to me that they’re reluctant to help other teachers because they feel their job security is threatened when they assist other teachers.

For example, district colleagues have said to me it is “dog eat dog” and “every man for himself.” One colleague said, “Why would I share my tips with you? So you can use them with your students and then when they get to my grade it will be harder for me to make big gains?”

My contract was not renewed. Yet my last observation was proficient and the commendations were: “Students were engaged, asked questions, and contributed to the lesson” and “good pacing throughout the lesson.” During the lesson it was noted “Students were tasked with explaining 5 features of accountable text talk.” It was also noted that the lesson had all the features of the cycle of effective instruction. Accountable talk, text dependent questions, and the cycle of effective instruction were all school initiatives I was tasked to meet. There is documented evidence that I had met these expectations.

I am very pleased that my students made 154% progress toward targeted iready growth and I expect my students made significant MCAS gains as well. However, those results will not come out until later this summer.

It was never my intention to be in the right faculty clique, but it was my intention that my students learned. I was a successful teacher in that respect. I suspect Lawrence is losing good teachers not because of lack of teacher efficacy but because of office politics.