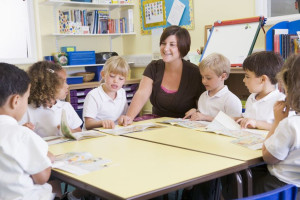 Last month, Tom Duggan posted a comment asking people if they supported merit pay for teachers and the claws came out.

I’ve been an educator for my entire adult life and I have never come face to face with anyone who expressed disdain for my field. I know few people are impressed with me because I’m an educator and usually say something like, “Wow. That’s awesome. I couldn’t do what you do.” I’ve heard it so many times that I’ve come to realize that it’s meaningless and the private sector, unless they are in a relationship with an educator or have one in the family, is completely ignorant to what an educator actually is and does.

One woman who commented on Tom’s post said things like, “Most teachers I’ve seen are completely without merit and would owe US money.” She cut down a profession that demands its participants to have a master’s degree by saying, “It’s a job, a low-paying, low-end job, at that.” These are blatantly ignorant statements. And, although this is her tragically misinformed opinion, she still sent her children to public school urging them to, “ignore their teachers, unless they wanted to end up having to be teachers for a living, too.” She tried to inform me that, “They are not YOUR students, they are OUR children, and WE pay your salary.” Her final bit of wisdom was that I was overpaid, Methuen’s ranking is lousy, and perhaps she’ll bring the thread to their (I’m assuming Methuen’s administration) attention. I love how people automatically threaten a teacher with “reporting you to your administrator” when they aren’t being successful at ruffling our feathers. Well, now my administration, whom I know are much more brilliant than this person gives them credit at being, knows of our exchange. I was waiting for her to kick sand in my face and steal my favorite toy, that’s how juvenile her exchange was. And anyone who demeans any job, career or profession shows a lack of character and depth.

Unfortunately, I know that she is not the only one with this sadly perverse opinion of public school teachers. This is why they are so quick to throw us under the bus. It’s due mostly in part to misinformation. Educators have no say in what our curriculum is. NCLB, the Common Core, and the federal government dictate it to us. You ask any educator about these programs and they’ll blow air between their teeth, roll their eyes and throw up their hands in frustration. It’s out of our control. Instead of complaining and pointing fingers at those of us in the trenches, why don’t you get off your proverbial buttocks and call or write to those who are making the decision for your child’s education? High-stakes testing is putting insurmountable pressure on administrators, teachers, and students. It has taken the autonomy and creativity that we all once enjoyed and replaced it with measurable and predictable quantitative results instead of qualitative and creative real world problem-solving skills.

Bad-mouthing educators is not going to help. In fact, it is entirely counter-productive. Who can I threaten to tell when a parent attacks my skills as an educator? When are parents going to be held accountable for their children who are absent over 40 times in one year, doesn’t eat breakfast, misbehaves every time the teacher turns their back or is working with other students, has a child that doesn’t do their homework because they are either lazy, they and their parents don’t care or they have to hide from a parent who beats or molests them daily? How about the parent who refuses to have their child experience the consequences for their behavior or the parent who blatantly gives their child permission to break a long standing school rule? Where are the parents’ role in their children’s education if they are not MY students?

NCLB was set up to fail. It was birthed through the marriage of large corporations like Microsoft and the federal government because nobody was making a buck. The public school system is a massive producer of our most precious commodity and nobody is getting rich off of it. This can’t be right. So, let’s create a system that has numerous ways to fail and few that will allow it to succeed so the charter school pushing agenda can say, “See, public schools are failing. We need more charter schools.” Truth be told, charter schools are failing, too. According to a study done by Stanford University, charter schools’ performance is below that of their surrounding public schools, promote segregation, and ignore the most needy of students.

Let’s talk about our needy students. I’ve had students who are so transient that they’ve been to more schools in their lifetime than I have in mine. No holes in their education. There have been students sitting in front of me who are starving because their last meal was the previous day’s school lunch, students who are so dysgraphic that they can’t even write their own name, students who have told me that school is the safest place they have (imagine what their summers and weekends must be like), I even had a student survive a home invasion the night before an MCAS exam. I’m sure his biggest concern was filling in the correct bubble. Then there are the scores of students whose parents just got divorced or they’ve just been introduced to their parent’s new love interest, have a parent in jail or one that is absent and so on. Nobody thinks of the diverse demographics sitting in front of every public school teacher day after day and year after year. Educate yourself before you start playing the blame game. When I responded to the education bully about teaching being a job by saying, “It’s a career, a calling,” she in turn said, “Please – a career, a calling – spare us.” Those who enter the profession when it isn’t their calling leave very quickly because it’s just too darn hard, but for those of us who stay, the rewards are incredible.
Martin Luther King once said, “Don’t look down on a person unless it is to help them up.” You teacher bashers are ignorant and small-minded bullies. If you don’t like what’s going on in local public schools, get your panties in a bunch when you think of your tax dollars going toward my salary and think educators are high paid buffoons then either do something to change it or move to a third world country where there is no public education. If you’re not going to do either, then shut your mouths.