By ValleyPatriot on November 29, 2020Comments Off on Technician 3rd Grade Donald Gelineau 285th Ordinance Co. U.S. Army ~ VALLEY PATRIOT of the MONTH, HERO IN OUR MIDST 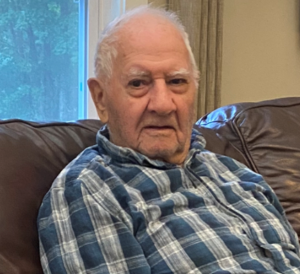 LOWELL – A native of Lowell, Massachusetts, Donald Gelineau served in the Pacific Theater during World War II for twenty-four months. Growing up in a large French-Canadian family during the Great Depression, he hunted, fished and gathered nuts/fruits to supplement the family’s food.

Don reminisces of his time as a child sitting on a floating log in a swamp with his legs dangling into the muddy water to collect leaches which he would sell to the local pharmacy. Donald was forced to drop out of school in 8th grade to go to work after his mother had a stroke. As the oldest child in the family, the responsibility fell on him to help support his younger siblings.

Later, he put himself through trade school to become a mechanic. Don recalls building a home, mainly from scrap wood which was salvaged. He just turned one hundred years old, celebrating his 100th birthday on August 18 of 2020. He is proud that he takes no medications and only started using a walking cane one month ago.

During his service in the Army, he was awarded the Good Conduct Medal, the American Campaign Medal, the Pacific Campaign Medal, the World War II Victory Medal, Expert Marksman, and both the Driver and Mechanics Badge. Upon his discharge from the US Army, he received $300 and the famous “Ruptured Duck”, the Honorable discharge pin which allowed you to ride US Public Transportation for free and protected you from being pressed into work details by officers and NCO’s.

While in the US Army, he was first designated an Infantrymen, but later trained as a mechanic. After the War, he worked as a mechanic for Woodworth Buick in Andover, Massachusetts. Later he worked for the City of Lowell where he spent many years repairing trucks at the Ashes and Waste department until his retirement.

Don and his wife, Lucille(deceased), have two children, five grandchildren, and six great grandchildren. Don and Lucy’s house was always open to the neighborhood kids, many would walk in without knocking and grab a can of coke or some Oreos. Don enjoyed helping neighborhood kids repair their bicycles and fixing neighbor’s cars for free, of course. Neighbors and friends all call Don, “Peperre” a French-Canadian term. After his retirement, Don enjoyed taking his grandsons on trips throughout New England, especially to Sebago Lake State Park.

Don is the type of guy who could spark up a conversation with just about anyone, and frequently, he did. One of these conversations resulted in buying a summer cottage in Winterville Maine, about as far north as you can travel within the USA. Don loved to speak French with his logging buddies, and even though Don was well into his seventies, he would be happy to travel into the woods to repair broken down skidders and other such equipment. He frequently spent many hours deep in the woods helping a buddy.

His only pay was an ice cold can of Budweiser.
Growing up during the depression and serving your country in war instilled a different perspective on life than that which subsequent generations may have. As typical of many who lived through the depression, Don was happy with the simple things. He knew that all was well so long as everyone was home safe with enough food and a roof over their heads. A 100 year old member of the Greatest Generation, but more important, I think a man whose life story, really represents how great his generation really was.

John Cuddy served in the US Navy’s Construction Battalions (also known as the Seabees) after retiring from the Navy; he earned a bachelor’s in history and a master’s in economics from the University of Massachusetts on the Lowell Campus.

He has been employed in Logistics at FedEx for the last 23 years. If you know a World War II veteran who would like their story told, please email him at John.Cuddy@Yahoo.com.