By ValleyPatriot on January 4, 2019Comments Off on The Abuse of Diamond Girl 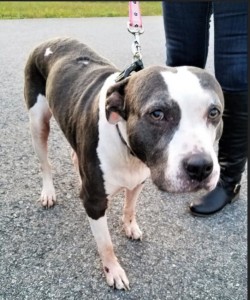 On September 23, 2018, a sickly, despondent, senior dog was found tied to a pole in Lawrence, MA. She was abandoned without food and water and had no identification tags or microchip. On October 5, she was euthanized. Over 12 days an unsettling chain of events unfolded at the expense of a very gentle 10-year old dog named Diamond.

Diamond lived most of her life with three adults in Methuen. Her primary caregiver was a 60-year old woman, who lived with her two adult children, male and female. Statements suggest Diamond’s owner was the 37-year old daughter, but details about ownership remain unclear.

In 2014 a law enforcement investigator responded to a complaint and found Diamond in a neglected state – poor skin and fur, underweight, and flea-infested. The home was surrounded by rat traps. In 2016 and 2017 a Methuen Animal Control Officer (ACO) also responded to neglect calls and found her in a similar state. Worse, on one of these visits the ACO found old burn marks on Diamond’s back. In addition, neighbors and a realtor called in their concerns.

Both the Methuen ACO and the investigator are said to have not had enough evidence to press charges or remove Diamond from the home, even after three visits. The ACO suggested Diamond be surrendered to animal control but the owner declined. Interestingly, both officers remember the calls because of Diamond’s especially sweet nature. Despite her condition and filthy living environment, she was a happy, sociable girl.

Early in 2018 the mother who owned the home in which she lived with her adult children and Diamond, moved to a one-bedroom apartment while the two younger adults allegedly stayed in a rooming house. Assuredly, Diamond would not have been welcome at either of the new locations. She was a pit bull terrier, a marginalized breed despite their loyal and affectionate dispositions. Diamond’s whereabouts for several months are therefore in question.

A good Samaritan found Diamond tied to a pole, took her home, and called Lawrence Animal Control. An officer brought Diamond to the holding facility which is located on the Essex County prison grounds. Massachusetts requires stray animals be held at least seven days to give owners time to reclaim pets and time for ACO’s to adopt out and/or network with other placement organizations.

As Diamond’s seven-day limit approached, she became more depressed, listless, and started to limp and fall. Per city policy, the ACO could not take Diamond to a vet as her health was not considered an emergency, which is the only level of vet care covered in Lawrence. Instead, the ACO contacted a woman and her daughter who volunteer with area pit bull rescues.

The volunteers immediately assumed the role of Diamond’s fosters. They contacted Animal Rescue Konnection (ARK), a nonprofit rescue devoted to helping at-risk dogs like Diamond, for guidance. ARK supported the fosters and also paid for her veterinary care. Bloodwork and tests confirmed she had several health issues including anemia, dehydration, malnourishment, a heart issue, and extreme lethargy. Worse, she was diagnosed with end-stage renal failure and given less than a week to live.

The volunteer fosters decided Diamond deserved the most caring and loving home for the last few days of her life. Some people may think euthanasia would have been the humane decision at this juncture. However, to right a severe wrong the foster family chose to give Diamond the most attentive hospice care possible and a peaceful, dignified passing. They were determined to shine a light bright enough to erase the previous weeks.

So they brought her home with medicine and an appetite stimulator. They set her up in a special corner with cozy pillows and warm blankets. They lied down on the floor to keep watch. As expected, she gradually declined. But through all this, in the few days at the foster home she refused to soil the house and struggled to reach the door. She was that obedient. She was that respectful. She was that good.

Meanwhile, the fosters suggested the ACO use social media to find the owners. At this point, authorities were unaware of Diamond’s background, let alone her name. There is no Facebook page for animal control, but Diamond was posted on the Lawrence police web page. This site, however, is neither a typical nor navigable site for owners to locate lost pets. So her picture was then posted to Lawrence on the Move, a Facebook page for locals.

The very next day, the owner saw the post and called the Lawrence ACO who connected them with the fosters. The call gave the ACO enough information to trace the owner’s history with animal control. The owner did call the foster family but repeatedly made empty promises to help Diamond, take her to a vet, and cover expenses. During one call the fosters placed the phone by Diamond’s ear and she immediately perked up. Though Diamond had been severely neglected and abandoned, she responded to her owner’s voice with tenderness.

After this reaction, the fosters felt it important for Diamond to say goodbye to this person. Since the owner did not have a car, the fosters brought Diamond to meet her at a gas station. Though very ill, when the owner approached the car this loyal dog opened her eyes, lifted her head, and licked the woman’s face. It was a tearful experience. This person was her world. The neglect, fleas, lack of food, suspicious burns, abandonment, and untreated disease didn’t matter to Diamond. She simply poured out the remaining love in her heart.

Later that night at the fosters’ home, Diamond experienced a horrific seizure and was then brought to a 24-hour veterinary hospital in North Andover. Clearly, it was time. The Lawrence ACO met them and both held Diamond during the procedure. She passed quietly in their arms at 2:30 in the morning.

Exhausted, the fosters and ACO requested permission to leave Diamond there for a few hours until the start of the work day at 8:30 a.m. The officer needed rest and time to retrieve the police van to transport Diamond to the pet mortuary A veterinary technician then gave the ACO a bill that included a fee to keep Diamond’s body in a freezer. The city pays for euthanasia but not the cost of an extended stay. Surprised, the officer asked for a break, but was refused.

With no other recourse, the ACO and foster carried a box holding Diamond’s body to the ACO’s vehicle. She stayed in the car’s backseat at the officer’s home until the morning shift started. The ACO later transported Diamond to the police station, transferred her to the van, and brought her body to the pet mortuary where it remains. Details of any investigation about Diamond’s treatment and abandonment are still unclear.

Diamond’s compelling story is a call for action, but it’s something more. Something deeper. Her story teaches us about friendship and forgiveness, and the meaning of unconditional love. Her unbiased devotion shows us how pets have an intuitive emotional edge over humans. Diamond was failed by systemic problems, but her spirit should prompt us to better serve lost and homeless animals.

It is worth noting the disparities in how cities and towns follow through with the state requirements to hold animals for seven days. Further, there seems to be no standard of care provided during the hold period to include exercise, socialization, and veterinary treatment. In this environment an animal’s emotional and behavioral well-being are severely compromised with each passing day.

It is an injustice when communities fail to properly network their animals or include volunteers to help with care. Many just wait out those seven days to simply transfer unclaimed pets to the local open-admission shelter that is already inundated with homeless animals. Plus, documentation stops after the transfer. This puts an end to finding out what happens to them.

In addition, the value a city or town places on its ACOs seems to start with the job description itself, which in turn reflects the value it places on its animals. Some communities seek qualified people with specific education and training, knowledge, compassion, and animal and rescue experience. Others advertise a short list of very broad qualifications.

While cities have varied expectations for their ACOs, animal control practices also significantly vary. For instance: some locales euthanize animals after the seven days; some transfer animals to overcrowded shelters where adoption chances are slim; some place animals with rescues/shelters with better resources; some set up their own adoption facilities and recruit volunteers; and some have ACO’s that  consistently push for better programs and options for the animals despite limited resources and support. They also follow best practices promoted by top animal advocacy and welfare groups. These surprising differences reflect how communities care for animals and support their ACOs.

From this story alone, several shortfalls have been exposed, but solutions for improving animal sheltering for both Lawrence and the state are readily attainable. (1) Massachusetts’ cities need a centralized reporting system linking neighboring communities where ACOs can post lost or found pets and where citizens can easily navigate to a list of lost pets. If nothing else, each city/town needs a site easily recognizable for residents to find and use. (2) Volunteers must be allowed to fill the gap, to help feed, care, clean, walk, and comfort animals. In Lawrence, volunteers are not allowed in the pound because it sits on prison grounds. (3) Ironically, Lawrence’s pound was intentionally built on the prison grounds so eligible inmates could volunteer to help care for the animals. This original goal has yet to be achieved even though prison animal programs have proved highly successful in correctional institutions across the country. (4) When lost or found animals go to a holding facility, they should be networked for placement and receive reasonable standards of veterinary care, daily exercise, social interaction, and simple amenities like clean blankets. (5) ACOs are important to the community. Cities/towns should ensure they are qualified, have opportunities to continue education, and have support of leadership.

Consider what’s happening in your community. What happens to found and stray animals? Where are they held? What happens when their hold time is up? What are the conditions? Do they receive care? Are they actively networked to find their owners and/or placement? Who has oversight and controls the budget? Is there follow-up on neglect and abuse calls? If euthanized, why? Can you volunteer?

Though this narrative reveals an unfair system that leaves animals vulnerable, many cities and towns across the state and country now use practices advocated by top organizations in animal welfare. Diamond must be the catalyst for communities to take some much-needed steps toward giving all animals in Massachusetts an equal chance to be cared for and re-homed.

Contact your legislators and local politicians. Contact your own ACO, police department, and health department to check their policies and procedures that your tax dollars support. Cities and towns are responsible for their own, and that includes animals. Things will change only when voters ask questions and show their elected officials how important this issue is to them.