By ValleyPatriot on September 6, 2022Comments Off on The Bear ~ TV TALK with BILL CUSHING 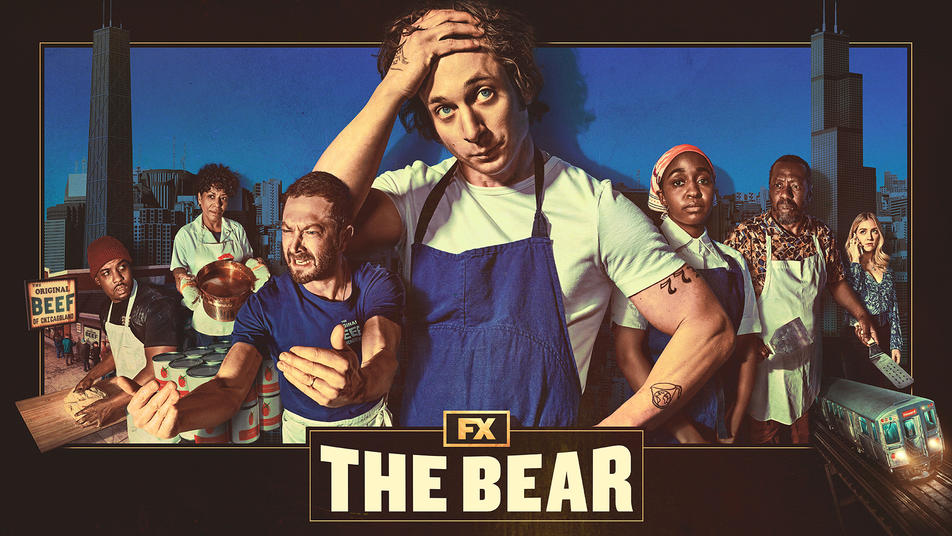 One of the biggest challenges these days when it comes to finding quality shows on TV, and finding something good to write about, is the sheer volume of content that there is to go through. A whole list of streaming services and hundreds of cable channels to watch. Sometimes it can be like finding a needle in a haystack. After all the buzz surrounding a new series that I had been hearing about called ‘The Bear,’ I decided to give it a try. The show is produced by FX and is broadcast on Hulu.

The series follows Carmen ‘Carmy’ Berzatto (Jeremy Allen White), an accomplished chef who cut his teeth in the fine dining world and has returned to Chicago to take over his family’s grungy sandwich shop The Original Beef of Chicagoland, after his brother’s suicide. His brother has left Carmy the successful, if run-down and mismanaged, business.

“I’m going to fix this place,” he tells his sister, Sugar (Abby Elliott), as much out of a sense of mission as a sense of business. Because frankly, as a business, it makes little sense to fix it. Of course, he is also out to fix himself, whether he knows it or not.

Rounding out the cast are Carmy’s brother’s best friend and manager of the restaurant, Richie (Ebon Moss-Bachrach), who detests Carmy’s pretentious attitude; Sydney (Ayo Edebiri), an accomplished chef in her own right who wants to learn from Carmy; and a slew of line workers who aren’t interested in wearing matching aprons or following orders from a relative newcomer. Richie is resistant to every change Carmy’s trying to make, including hiring the green but incredibly driven Sydney to come on as his Sous Chef.

Created by Christopher Storer (‘Ramy’), who is the showrunner along with fellow writer, director, and executive producer Joanna Calo, ‘The Bear’ is anything but comfort TV. It’s frantic chaos right from the opening minutes and never lets up. Much of the eight, half-hour episodes are spent in the kitchen, as dishes clang, feet shuffle, and chefs shout over one another. Aside from the opening credits, Episode 7, ‘Review,’ is told in a single, 20-minute uninterrupted shot, and shows a kitchen in chaos. Sydney accidentally left the preorder option on their webpage after accidentally giving a reviewer some risotto that wasn’t even on the menu. Instead of slowing down, Carmy tries to rise to the occasion and fulfill all the pre-orders. The episode is as stressful and as brilliant as anything on TV this year.

The cast is tremendous, they’re all so good and at the top of their games. White is terrific in the lead role, but if there is a standout, it’s Ayo Edebiri as Sydney. Watching Sydney begin to hold her own in this new environment is one of the best things about ‘The Bear,’ as is Edebiri’s performance. She nails Sydney’s evolution into a force in the kitchen, bringing her drive and passion for cooking to the forefront. She’s also responsible for some of the funniest moments in the show, including any time she gets an opportunity to take Richie down a peg.

Shows like ‘The Bear,’ with its unique storyline, presentation, and performances, don’t come around too often. It’s a show that can be devoured in one night if you so choose. Make sure you give it a chance; it will be worth your time.

‘The Bear’ has been renewed for a second season, and the first season is available to stream on Hulu.