By ValleyPatriot on September 6, 2011Comments Off on The Canine Heroes of September 11, 2001 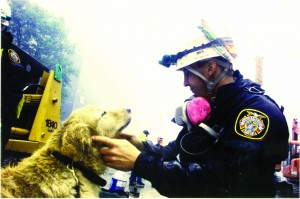 Ten years later…it is as if it was yesterday. After the buildings went down, the search started. Images of firefighters, police, military, New Yorkers and tourists all helping out, looking and searching.

As a viewer watching this unravel on TV, I still couldn’t fully comprehend or maybe believe what I was watching. But I noticed dogs, and more dogs, police and fire dogs and search and rescue dogs.

I clearly remember thinking, are they trained for this? As a Country, most of us hadn’t experienced anything like this. Our Military had, and the dogs of the Military had been trained for combat, had served in Desert Storm and in other military conflicts, but this was a different type of event. FEMA was utilizing dogs but their team consisted of less than twenty trained K-9’s. As an animal professional, I became even more intrigued how the dogs would be utilized at Ground Zero.

These dogs were going to have to be able to sniff out humans, fire, bombs, explosives and even unknown foreign objects. At that point, nobody really knew all the details of what occurred around this event. Nobody really knew what to expect. A handler really had to trust his dog and let the dog do what he was trained to do. The handler had to have a keen eye and respond to every signal his dog was going to give him.

I saw a clip on the news about an organization called National Disaster Search Dog Foundation. They were one of the organizations that deployed to the site.

I immediately wanted to find out more about them and my research began. How these dogs were trained, what were they capable of doing, will they be able to handle an event of this size. In fact, my passion for working dogs began from the events of 911.

I was glued to my TV and flipping from station to station to watch each and every part of this rescue and in every scene I saw police and fire departments from all across the country showing up with their dogs.

The important part these dogs played in the search from both a rescue and a recovery perspective is unbelievable. The towers had already tumbled, people were trapped and our first line responders were unable to find or to get to them. Emergency rescues were relying on the noses of their dogs. These dogs not only sniffed to their needed location but the dogs were the ones that crawled into the debris, the dogs were the ones that stepped on the smoldering ground and the dogs were the ones that were digging into the rubble. For most of the people saved from underneath the building, their first contact with life was with the dog that found them.

The events of 911 really brought well deserved attention to the power of K- 9 search and rescue. Since 911 more and more towns, cities, States and government agencies have added additional K-9’s with several different search specialties to their forces.

In respect to the Anniversary of 911 please take a moment and say a little pray to the K-9’s that took part in the tragedies of that day. Some of those dogs lost their lives at that site, some were burned and several became ill with various diseases including lung cancer from that event. Ten years later, most if not all of these K-9 Heroes have passed away. They are not to be forgotten. Think positive thoughts in regards to all the human lives that were saved or to the families that were able to have the recovery of a lost one, all with great appreciated and a special thank you to “Man’s Best Friend “ 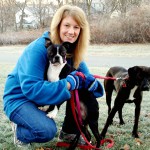 Tracey Zysk, owner of Wiggles & Jiggles Pet Care in North Andover MA is a local pet care professional. She has been featured on local radio, tv and newspapers educating the general public on animal care and animal health & wellness. Tracey is a proud supporter of Police, Fire & Military K9 units. Tracey may be reached at wigglewalk@comcast.net. Become a fan on facebook at Wiggles & Jiggles Pet Care and follower of www.traceythedogwalker.blogspot.com