By PeterLarocque on June 25, 2013Comments Off on The Declaration of Independence vs. City of Lawrence 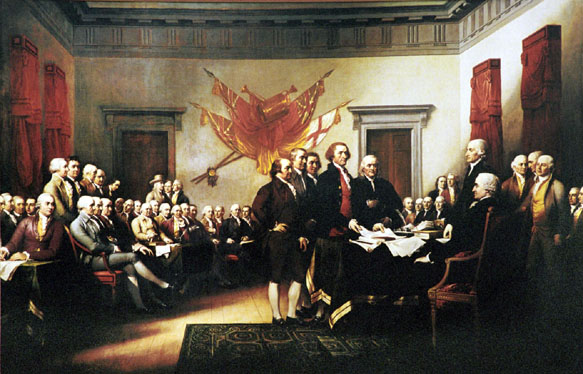 According to the Declaration of Independence, life, liberty, and the pursuit of happiness, are unalienable rights of all the people endowed by their Creator. To secure these rights, Governments are instituted deriving their just powers from the consent of the governed, the people!

Whenever any form of Government becomes destructive of these Rights, it is the right of the people to alter, or abolish it, and institute new Government! This all sounds so wonderful and good, but for some reason the above doesn’t seem to apply to the City of Lawrence. Why is that?

Both of these make reference to the fact that the people of Lawrence no longer have meaningful input when it comes to the education of their children. Sadly, this was all accomplished in the light of day by those who were elected to represent the people of Lawrence. Add to this, millions of state and federal dollars are being spent in the name of reforming the education system for Lawrence’s children without any accountability by anyone in Governor Deval Patrick’s administration! What does the Patrick administration stand to gain by the lack of transparency in the state takeover of Lawrence’s public schools?

Unfortunately, Mayor Lantigua has successfully convinced the citizens and parents of Lawrence that the state takeover of their school system is a good thing. The State Receiver/Superintendent, Mr. Riley, has also successfully convinced the same that his turnaround plan for the failing Lawrence public schools is their only hope. Unfortunately, their success has also removed most parental concerns even though it was minimal to begin with, parents can just move along because there is nothing to see here!

Mayor Lantigua and Receiver Riley along with the politicians, whom we have elected to represent us, have successfully removed all checks and balances to this takeover of Lawrence’s public schools by the State Department of Education! What are they hiding? Is there any local or state elected officials who gives a damn? Have they all drunk the same Kool-Aid?

In the opening paragraph of this column, I referred to the very document that mentioned what to do when government no longer represented the interest (the people’s rights) of the people governed, [what to do when the government became destructive of these ends], that it is the right of the people to alter or to abolish it and institute new government! Well folks, the people of Lawrence did exactly that!

Back in 2010 and 2011 there were a series of meetings under the City Charter Review, (required by the City Charter every 10 years), and it was during these meetings new recommendations to the City Charter were put forth concerning the Lawrence School Committee, how it was to be elected and how the committee itself was to appoint a Chairman and Vice-Chairman. To make a long story short, the new recommendations could not be implemented because of the style of government Lawrence has which is a strong powerful Mayor and a lesser powerful City Council.

This is truly Massachusetts politics at its best! A heavily Democrat progressive party ruled type of government! This is why there is no public outcry. The majority believe in a cradle to grave socialist style of government, which unfortunately includes our education system.

Back to those articles that were printed in the daily paper, which by the way, did not mention the City Charter review meetings recommendations concerning the Lawrence School Committee. I believe they purposefully left it out so that they could push their agenda that the City of Lawrence is incapable of governing itself!

Both articles in the daily paper quoted Mr. James Vittorioso, the voice and member of the Lawrence School Committee for 12 years. He was quoted as saying, “it was pointless to run for another term because of the lack of power of the School Committee members.” I find it ironic that Mr. V. makes this statement knowing full well that it was his vote in 2010, along with the Mayor and two other members, resulting in that specific School Committee not being able to find a Superintendent to replace Dr. Laboy who they fired.

It was Mayor Lantigua’s lack of leadership as the Chairman of the School Committee, along with the rest of the members of that specific School Committee, which caused the State Education Department to come in and takeover in the first place! It was not the failing Schools that initially brought the State into Lawrence’s Public Schools. Don’t believe the Mayor’s lie!

(This all can be verified if you refer to the 81 page report of a review of The Lawrence Public School System conducted by the Department of Education in 2011.)

The state takeover resulted in removing any and all power and voting privileges from the School Committee and gave those privileges to the state appointed Receiver/Superintendent. Mr. Riley has all power and authority to do as he sees fit and spend how much he sees fit, all in the name of educating the children of Lawrence. The daily paper also quoted a spokesperson from the Office of the State Education Commissioner, Mitchell Chester, “That even without a vote, the School Committee does have a role to play and that the Receiver/Superintendent definitely values the School Committee member’s input.” (If you believe that, I have some ocean front property I would like to sell you in Colorado!) So again folks the bottom line is, no checks and balances!!! Hard to believe we are talking about a city in America, but unfortunately we are, (OIL!)

In conclusion, I would like to give a special message to all Lawrence Mayoral Candidates in the 2013 City Elections. Please write this down, make it a part of your agenda that within your first four years as Mayor of Lawrence that you will begin the process of ending the state takeover of the Lawrence public schools and restore the voting privileges of the Lawrence School Committee, therefore giving back to the parent’s local control of their children’s education! Local control, local oversight has been and will always be better! Stop believing the lie that the opposite is better! Government should never remove parental rights in the education of their children, not in America!

G-d bless all of you, and may G-d continue to bless the City of Lawrence.