By Dr. Charles Ormsby on February 13, 2014Comments Off on The Democrat’s Poverty Preservation Program and What We Should Do to Fix It 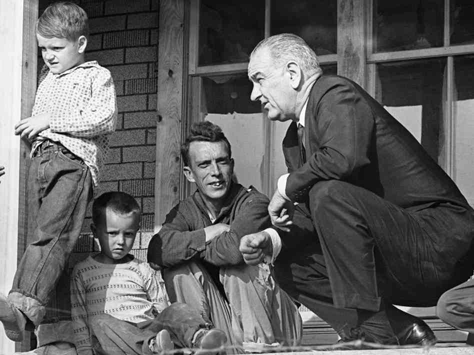 Fifty years ago this month, in 1964, President Lyndon B. Johnson declared an all-out War on Poverty. He vowed “to not only relieve the symptoms of poverty, but to cure it and, above all, to prevent it.”

To date we’ve spent over $20 trillion on this boondoggle, approximately 1000 times the cost of the Apollo Program. Despite this huge expenditure, the percent of Americans living in poverty today, approximately 15%, is unchanged from what it was 50 years ago.

We have done vastly more damage than good.

It is one thing to screw up a ham sandwich; it is quite another to throw away $20 trillion and destroy the lives of millions of Americans in the process.

Approximately one in three Americans receive government assistance (not including Social Security or Medicare). Today we are spending sixteen times as much in inflation adjusted dollars on poverty programs as we did in 1964.

It is time to run up the flag of surrender and try a new approach. The answer is to privatize the War on Poverty, which was really a War on Prosperity and a Poverty Preservation Program in disguise.

I propose phasing out over a 12 month period ALL government welfare spending for those capable of working. While phasing out the poverty bureaucracy and the taxes used to support these failed programs, I propose that we remove ALL government-imposed barriers to economic growth and job creation, barriers that have led to our pathetic 59% workforce participation rate – the lowest rate since the mid-1970s.

It is time to make both job creation and working legal again on our terms, not the government’s.

It is important to understand a key principle: Governments do not produce prosperity. They only get in the way.

Some readers may be appalled by my suggestion that we end all welfare programs and let a vibrant free market cure the problems faced by the poor.

I can’t imagine why. Since government is the primary engine of wealth destruction and private enterprise is the source of wealth creation, isn’t it natural, if the goal is to increase prosperity, to curtail the interference of government and unleash the forces of the free market?

Clearly, the only way to eradicate poverty is to get everyone to attack the underlying causes. And that has to include the poor themselves.

Just think, we have approximately 50 million people designated as below the poverty line, most of whom are largely unproductive. If there were work available for them AND they were motivated to work, 90% of the poverty problem would be solved.

The Ormsby Poverty Eradication Plan ensures that productive jobs would be available because ALL of the artificial barriers to employment that have been erected to discourage hiring would be eliminated: NO minimum wage, NO required benefits, and NO employment or income taxes on the first $20 thousand in wages.

Would those who are currently below the poverty line be motivated to work?

They would for three reasons.

First, because jobs would be readily available.

Second, because the initial wages earned – the first $20,000 – would not be burdened by any deductions. It would represent spendable cash in their pocket – all of it available to support their needs.

And third, those below the poverty line would be motivated to work BECAUSE … drum roll please … there would be NO government handouts to support a slothful alternative.

Their choice would be to work or to depend on private charity.

Does this sound harsh? In fact, it is quite the opposite. This program would convert 90% of welfare recipients to be confident and proud, self-reliant individuals. Of course, some would choose sloth and subsequently accept the economic consequences.

I understand that, despite the availability of jobs and the motivating power of NO income, some cases of real, unavoidable hardship would remain – but the number of individuals experiencing real poverty despite their best efforts would be minuscule when compared to the number of current welfare recipients.

With many more Americans working and the tax burden greatly reduced (because the government would no longer be subsidizing unproductive behavior), the economy would become much more vibrant and private charity would easily be able to cover the needs of those who remain at risk through no fault of their own.

If we followed this program, the poverty rate would plummet from 15% to one or two percent. With the problem less than one fifth the size of the problem we have now and the economy rapidly generating wealth, there would be no lack of help for those who are deserving of assistance.

All of us have seen it before: An individual struck by a terrible disease who lacks the resources to pay for the required medications, or a family rendered homeless by a devastating fire.

Private contributions routinely provide more than ample resources to deal with such crises. As these crises pass, those who voluntarily provided the needed charitable contributions expect recipients to pick up the responsibility for fully restoring their security and their level of comfort. Except in extraordinary situations, they are not permitted to endlessly rely on the charity of others.

This is a far cry from current government welfare programs that routinely encourage long term dependency and that foster and maintain a caste of permanent government dependents.

While public charity encourages dependency and sloth, private charity discourages such behavior and, thus, BOTH responsible and irresponsible behavior will be PROPERLY rewarded.

If we really want to dramatically reduce poverty, public welfare must be phased out and replaced with private charity. If we are willing to do this, we will finally win the War on Poverty and have a more productive and prosperous society to show for it.