By Paul Murano on October 22, 2015Comments Off on The Fascinating Francis Phenomenon ~ BENEATH THE SURFACE 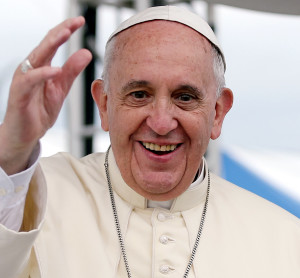 A very unexpected thing happened throughout the media and in the nation last week. We were inundated with all things pope. There was non-stop coverage of the papal visit on cable and network stations, even from those that normally spend their time criticizing and ridiculing the Catholic Church and her teachings. Anchors were acting like schoolgirls with a crush as they collectively gushed over Pope Francis – including those from the network otherwise devoted to being the enemy of truth and goodness, MSNBC. Very fascinating.

It seems this love affair began with the infamous words, “Who am I to judge them?”, which supposedly set a tone for this papacy. At least that’s what the media told us. Francis was answering a direct question about priests who may have a propensity to same-sex attraction but who seek to follow God and His will. The pope simply repeated the biblical imperative which is the constant teaching of the Church: We are called to judge acts, not persons. Discerning good and evil behavior is our job, but judging the guilt and state of soul of a person is God’s. Only He knows the level of knowledge and consent one has when choosing an act. Nevertheless, it was perceived as a crack in the door for many who are usually on the sidelines, to proclaim this pope as their own. And this begs the question: Why is it so important for non-Catholics and ‘bad’ Catholics to gain approval from the pope?

Every pope, like every person, has a unique personality and approach to his work. Jesus said, “I came not to call the righteous, but sinners” (Mark 2:17); and in referring to the lost sheep He said, “There will be more joy in heaven over one sinner who repents than over ninety-nine righteous people who have no need of repentance” (Luke 15:7). Pope Francis loves with Christ’s love and seeks healing and wholeness for all, especially the poor and the lost.

The truth of Church doctrine, especially in matters of sex, life, and the family, can be a stumbling block for two groups of people – the weak and the stubborn. Both groups find peace and hope in the love of God that Francis reflects, because, like sunlight to a flower, it is built into our nature. However, the stubborn hate the truth, while the weak simply feel powerless. This is an important distinction. The stubborn angrily refuse to sacrifice the lifestyle choices of their disordered desires, but the weak are only discouraged by a feeling of futility. It makes sense that the stubborn were completely disillusioned after hearing Pope Francis visited Kim Davis to encourage her to follow her conscience in saying yes to God rather than men. The weak, however, unlike the stubborn, see such encouragement as a good thing. The stubborn who gushed all over the pope while he was here will undoubtedly continue their bashing the Catholic Church for not giving in to their desires, but the weak have no such malice and remain open to God. Francis is the pope of the weak, and that includes all of us to varying degrees. As St. Francis of Assisi once said, the pope’s namesake: “We are all poor in the eyes of the Lord.” Pope Francis represents Christ’s utmost concern for His poor lost sheep.

Every human being knows deep inside they need love, validation and affirmation; but only the wise seem to know they need forgiveness and strength. Only the wise bow before God rather than demanding He bow before us. Pope Francis knows the poor and the weak have this humble heart and he will not rest until all the sheep have made their way back to the Good Shepherd.

The surprising response to the pope’s visit in our minority Catholic country makes it clear that people of all faiths recognize the pope – whose titles include the Successor of St. Peter, the Servant of the Servants of God, and the Vicar of Christ on earth – as a unique instrument of God’s truth and love to the world. Were some of us frustrated that the pope did not speak more pointedly to Congress about the evils that have become legal in our nation? Absolutely. But, as Francis knows well, one cannot appreciate God’s truth or even love one’s self without first knowing God’s love. Pope Francis is speaking specifically to those who involuntarily find the beauty of Truth to be a stumbling block to receiving God’s love. It is impossible to support the choice to kill unborn children or to desecrate natural marriage in any way after truly encountering the God of love.

Pope Francis reflects Christ in telling us what he stated in that original papal interview that allegedly “set the tone” for his papacy: If you are sincerely seeking God and His will and are open to his grace, then who am I to judge you?