The Havok Wrought by Modern Math – THINKING OUTSIDE THE BOX

By Dr. Charles Ormsby on March 4, 2004Comments Off on The Havok Wrought by Modern Math – THINKING OUTSIDE THE BOX

If you are a parent of elementary school children, you’ve probably seen it: elaborate make-work homework assignments, cutting and pasting extravaganzas, overly complex and roundabout procedures to add or multiply numbers, estimation exercises that won’t quit, and the use of calculators in place of traditional arithmetic methods.

You thought: “Of course, the educational professionals must know what they are doing. Once my children catch on to these clever techniques, they will develop into mathematics geniuses!”

Unfortunately, what you discover is that they never learn the core facts and methods, their confusion grows, they lose their self-confidence, they decide they just can’t do math, and you are stuck paying for tutoring. Even worse, children who might have become exceptional mathematicians, engineers, or scientists are denied their rightful future.

What went wrong? Years ago the educational establishment decided that teaching mathematics had to either consist of rote memorization (without real understanding) or students had to discover mathematics through trial and error because it was assumed that only if they discovered it themselves would they truly understand it.

While this view presented a false choice (there are much better alternatives), the educational community was sold on the second alternative because it had an intellectual cache that was lacking in “rote memorization.” What resulted was the various “modern” math curricula for our children that underemphasized learning math facts, that bend over backward to avoid teaching standard methods for addition, subtraction, multiplication and division, and that refuse to teach traditional processes for manipulating fractions. 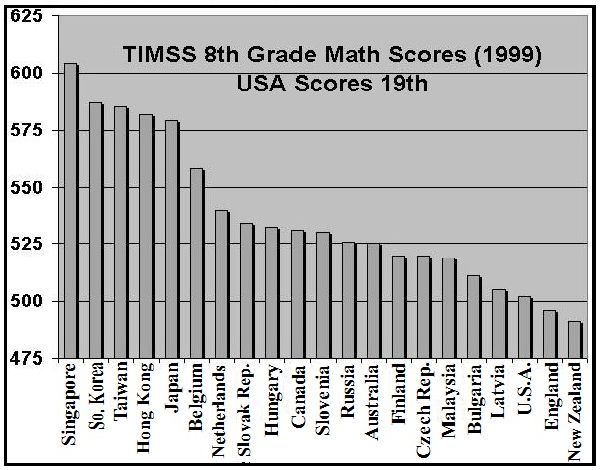 Almost all our public schools today use one of the “modern” math curricula and millions of promising math-based technology careers are being ruined every year.

Permit me a short excursion. I have a technical/engineering background (PhD MIT ’74) that rests largely on advanced mathematics. One reason I followed this path is that, as a student, I always had poor memorization skills and, therefore, subjects such as biology, chemistry, and foreign languages were very difficult for me. I loved math and physics because there was very little memorization; I could derive any formula I needed during a test. “Understanding” was a much more powerful asset for me than memorization. If anyone would be inclined to favor understanding over memorization it would be me. But modern math is a disaster. I’m convinced that if I had been “taught” math with it 50 years ago, I would probably have become a poet (my English teacher is rolling over in her grave).

So, do I favor just rote memorization? Of course not. Successful math education requires that students learn the techniques that true geniuses have developed over the last 3000 years. You may think the standard technique used to add numbers is trivial (place value concepts, carrying, etc.), but it was not obvious to the ancient Greek philosophers. Multiplication, long division, and fractions are even more complex.

Teaching the techniques first and then exploring the underlying concepts and why these techniques work is the most efficient way to achieve true understanding. If Socrates and Aristotle couldn’t invent our modern arithmetic system, why do we think the typical third or fourth grader can?

The impact of “modern” math on students in the US has been devastating. Just look at how the US stands up against other countries. The United States ranks 19th.

Place an equal emphasis on method mastery AND conceptual understanding, and you have the makings of a powerful elementary math curriculum. A curriculum that leads to real learning, that builds self-esteem and, rarest of all, a child that comes home and says, “Hey mom, I really love math!”

This approach to math education is not new. It is what a well-taught traditional mathematics course always emphasized. In some cases, poor teaching may have led to over-emphasis on rote memorization drills, but that is no reason to stop teaching the critically important mathematical methods.

How are we doing with early mathematics education in this area? As the table shows, not very well. While the differences in scores between towns/cities may be accounted for by socio-economic factors, the percent of students who are not proficient (meaning they scored as “Needs Improvement” or “Warning/Failing”) in fourth grade (90% in Lawrence, 60% in Methuen, 50% in North Andover, and 34% in Andover) cannot be excused. Even worse is the lack of progress after four more years of what passes for math “education”.

The trend towards “modern” math may finally be slowing. Parents are upset with the lack of a rigorous math curriculum and the need to hire tutors or enroll their children in remedial after school programs. A nationwide movement is growing to expose the failures of “modern” math and restore an academically sound curriculum. If you are interested in learning more you should go to: