By Tom Duggan on August 19, 2018Comments Off on The History of The Saint Alfio Society and Feast of the 3 Saints – 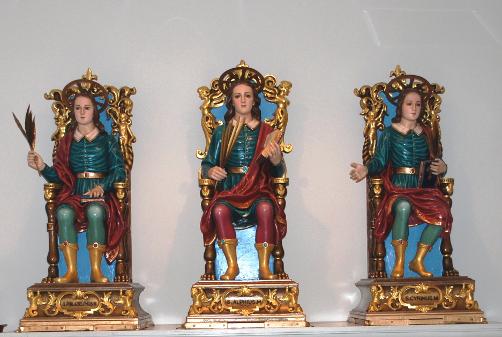 The history of the Saints Alfio, Filadelfo and Cirino Society goes back to the early years of the twentieth century, Est.1921, and is as much a part of immigrant history as it is of the history of Lawrence, Massachusetts.

The Saints that make up the name of the Society are three brothers martyred in the third century for refusing to denounce their Christian faith. During their lifetime and even after  their death, numerous miracles occurred which are attributed to the intercession of the Three Saints, even today. Since the 1500s, the people of Trecastagni, Sicily have held a grand Festa each May 10th in honor of the Three Saints.

During the early part of the 20th century, immigrants from this region of Sicily came to the Merrimack Valley seeking employment in the numerous textile mills throughout the area.

Often, working conditions were unsafe, medical insurance was not provided and there was no social welfare net for these employees and their families.

To help each other, these Sicilian immigrants formed a mutual benefit organization, to provide medical needs, a death benefit and offer food assistance where needed. In short, the immigrants created their own social security.

But there was more than just a mutual benefit charter—these immigrants from Trecastagni and the surrounding towns in Sicily that settled in Lawrence brought their faith and the tradition of the Feast with them. The organization was created in honor of the Three Saints of Trecastagni: Società di Mutuo Soccorso – Santi Martiri Alfio, Filadelfo & Cirino.

The first Feast was held in 1923 and has been an annual event in Lawrence now in its 95th year. Since then, the Saints Alfio, Filadelfo and Cirino Society has maintained the tradition of honoring the Three Saints in the same manner as the original Festa in Trecastagni, Sicily.

Today, the Society focuses not only on its members, but outward into the community, providing scholarships for local college-bound seniors, donating to area charities and offering assistance throughout the Merrimack Valley.

feast of the three saints, Filadelfo and Cirino, Saints Alfio

The History of The Saint Alfio Society and Feast of the 3 Saints – added by Tom Duggan on August 19, 2018
View all posts by Tom Duggan →