By ValleyPatriot on January 2, 2019Comments Off on ‘The Kominsky Method’ ~ TV TALK with BILL CUSHING 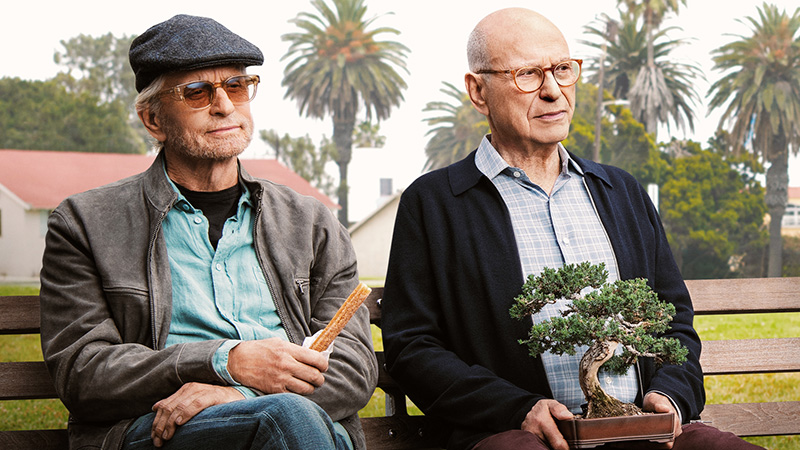 Netflix had a lot of success by pairing up a couple of aging stars like Jane Fonda and Lily Tomlin in ‘Grace and Frankie,’ so why not try it again? This time they’ve enlisted Michael Douglas and Alan Arkin in the charming new series ‘The Kominsky Method.’

Arkin and Douglas have never done a comedy series, and surprisingly enough, they’ve never worked together before. The two Oscar-winners are in the very capable hands of sitcom giant Chuck Lorre, best known for creating ‘Two and a Half Men’ and ‘The Big Bang Theory.’ Lorre has plenty of experience creating and writing sitcoms, and gives Arkin and Douglas a lot of good material to work with. They are perfect together in this series that blends jokes about getting old with the serious reflections that come with aging.

Douglas plays Sandy Kominsky, a Tony-winning actor who hasn’t had a big role in quite a while, so he makes a living running an acting class. Alan Arkin plays Norman Newlander, Sandy’s longtime agent and best friend who has just been widowed after decades of marriage to his wife Eileen, played by Susan Sullivan.

Both Sandy and Norman have daughters. Mindy (Sarah Baker) is stable and caring and reminds others often she wasn’t raised by Sandy, which pretty much explains why she is so stable. Norman’s daughter Phoebe (played excellently by Lisa Edelstein), is an addict and is a constant concern. Sandy is also in the process of beginning a relationship with one of his older students Lisa (Nancy Travis). Lisa is a recent divorcee with a teenage son. She’s treating herself to acting classes and gets Sandy to think about his life in ways he never did before.

Through it all, Sandy and Norman are very aware that they’re both a lot closer to the end of their time than the beginning. But the show manages to be real without getting consumed by the pain and fear behind it. Some of the stories are serious, such as Norman contemplating his life without Eileen. Some are relatively light, like Mindy trying to get Norman to bail Sandy out of trouble with the IRS. But most manage to hit the sweet spot where they’re both serious and funny all at once, like when Sandy has a prostate cancer scare. His trips to the urologist are nothing short of hilarious thanks to the wonderful performance of Danny DeVito as Dr. Wexler.

But it’s the great writing and consistently smart and funny dialogue between the two leads that make the series shine and showcases their comedic timing and talent.

In one scene, Arkin’s Norman, faced with the prospect of living the rest of his life alone, wonders why he should even go on living.

“Oh, please,” Sandy tells him. “You’re not killing yourself.”

“Are you offering to murder me, because that would be very thoughtful,” Norm replies.

“You’re beloved. A lot of people would be very sad,” Sandy says.

It’s that type of hilarious back and forth banter between Sandy and Norman that defines the show and consistently delivers its best moments.

Michael Douglas and Alan Arkin show that even though they are getting old, their performances aren’t, as they turn in some of the best work of their careers.

‘The Kominsky Method’ is available to stream on Netflix.