By ValleyPatriot on January 1, 2020Comments Off on ‘The Morning Show’ ~ TV TALK with BILL CUSHING 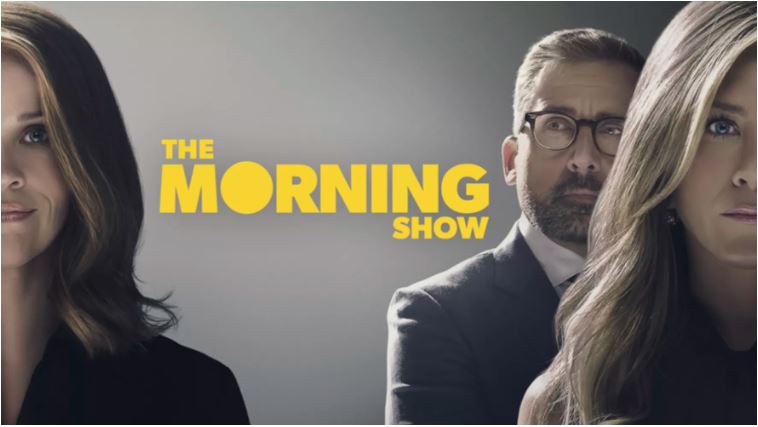 Apple TV+ fired the first shot in the new streaming war, when it launched its streaming service on November 1st, with the premiere of the highly anticipated ‘The Morning Show.’

‘The Morning Show’ has a very impressive cast led by Jennifer Aniston, Reese Witherspoon, and Steve Carell and centers on the behind-the-scenes drama of network morning news show after a scandal threatens to destroy the show.

Carell plays Mitch Kessler, who is fired by the network after being accused of sexual misconduct in the workplace. Meanwhile his partner Alex Levy (Aniston), who was already negotiating for a new contract, feels blindsided. It’s impossible to watch ‘The Morning Show’ without drawing comparisons to the Matt Lauer, Today show scandal.

As things for Alex and Mitch’s go from bad to worse, a reporter named Bradley Jackson (Witherspoon) in West Virginia is working for a conservative news station and gets national attention for confronting a protester at a coal mine demonstration. She gets invited to be a guest with Alex on The Morning Show and eventually, through some plot points that are a little hard to believe, she gets picked to replace Mitch.

The new partners, Alex and Bradley, have been through a lot, personally and professionally. As women in their 40s in an industry that is obsessed with age and image they know that they should be supporting one another. But instead they become bitter rivals.

The three leads of ‘The Morning Show’ do some real great stuff here. Aniston and Witherspoon are great together and the scenes between them are electric. Carell is exceptional as Mitch, but is really in more of a supporting role. Incidentally, Carell is only committed to one season and is unlikely to return for the shows second season.

Witherspoon and Aniston are also executive producers, and even though they get equal billing this just feels like Aniston’s show. She gives the best performance of her career, stealing every scene that she is in. We’re not used to seeing Aniston as a dramatic actress at this level, and she nails it.

Through the first 4 hours of this series, the Me Too movement is both praised and questioned in ways that might make some people uncomfortable, but it makes for interesting TV. ‘The Morning Show’ doesn’t ask us to feel bad for Mitch, but instead wants us to understand his confusion over what he did wrong and what he calls ‘the specificity of the #MeToo movement.’

‘The Morning Show’ also has a great supporting cast. Billy Crudup is terrific as Cory Ellison, the newly installed network president who sees Mitch’s dismissal an opportunity to leave his mark by reinventing the show. Mark Duplass also does a nice job as Chip Black the embattled producer of The Morning Show who fights Bradley’s hiring every step of the way.

I have a couple of minor issues with ‘The Morning Show.’ I felt like it was being a little preachy at times with some of its dialogue, such as Bradley’s rant to the coal mine protestor, and some of the minor supporting characters don’t seem to fit. Overall, though, it has a lot to offer to TV viewers.

Apple reportedly spent $300 million dollars on this show, and you can tell. It’s a great looking show. It’s very well done with great performances and Apple should be proud of its first venture into original programming.

‘The Morning Show’ has already been renewed for a second season and airs on AppleTV+ on Fridays.