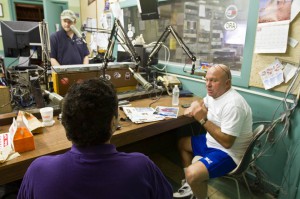 Today Tom and Paul talked about Forgeries on Mayor Lantigua’s nomination papers, Tom interviewed Mayoral Candidate Marcos Devers and asked him about Lantigua’s failures, corruption and shenanigans and why he should replace Willie Lantigua as mayor. Mayoral candidate James Patrick O’Donoghue called in to take Tom to task for saying that nobody can beat Willie Lantigua for mayor.

Five time Golden Glove winner Bobby Christokos came in to talk about his 30 years as a little league umpire….. and in the final hour Tom Played an interview he and Christine Morabito did with Lt. Colonel Allen West.