Murdered by a Failed belief System

My heart sank when I got the call the day after Christmas.

Jerry Flynn from the New England Police Benevolent Association called to tell me that a police officer was being rushed to the hospital from a shootout in Woburn and that the Officer, Jack Maguire was not going to make it.

In the hours and days since that phone call, details started to come out about how the Massachusetts Parole Board had set free a violent sociopath with no regard for human life; a man who had attempted to kill before, had shot a man, robbed dozens with a gun, escaped and committed violent acts against innocent victims while he was on the run.

I wish I could tell you I was surprised to learn that Dominic Cinelli was a parolee serving THREE life sentences when he pumped four bullets into Officer Maguire’s body.

I wish I could tell you I was shocked that the Parole Board’s release reports cited what they believed to be overwhelming evidence that Cinelli was no longer violent and that his release was “not incompatible with the welfare of society.”

After all, Cinelli had proven to our out- of-touch Parole Board that he was no longer violent by recently ceasing to commit violence while he was in prison, unlike his behavior in the decades prior. He had given lectures to Toastmasters, (a public speaking club) he had gotten his GED and attended twelve step programs.

I wish I could tell you I was as shocked as the media and the public was when these details came to light… but I wasn’t.

After spending a lifetime in politics and as the son of a murdered Lawrence Police Officer, I’d seen this far too many times before. People in positions of authority, making decisions based on their ideology, and over-educated theories, had no clue what real evil was and what real evil does.

Politicians, Parole Board members, Judges and others, all with their good intentions and theories of the “causative factors” that “MAKE” people commit crimes… really believe that if they just mitigate those “causative factors” violent people will be cured of their lust for robbery, rape and murder.

That if those who have long ago surrendered their humanity are just educated as to how they are expected to behave, they will finally “get it” and turn their lives around.

These do-gooders honestly believe that those who commit violent crimes and put their own impulsive wants ahead of the lives, needs and rights of others, can be conditioned with twelve step programs and long term “positive programming” to be productive members of society.

As I read the parole report of Dominic Cinelli, all the naïve, foolish, political buzz-words used by the ignorant ideologues jumped of the pages at me.

The report states: “Mr. Cinelli appears to have taken seriously the Board’s admonitions following his last hearing that he needed a long period of positive adjustment and participation in programming to address the causative factors of his criminal behavior.”

The reality is that the only“causative factor” of Mr. Cinelli’s criminal behavior was that he didn’t care. He didn’t care about other people he only cared about getting out of prison so he could once again satisfy his lust for violence.

He didn’t care about turning his life around, he laughed inside at the requirements of his parole as he conned them.

All the while he went through the motions to secure his freedom knowing that the do-gooders, with pie in the sky ideas of what “caused” him to commit crimes, would eventually be fooled and let him out.

Dominic Cinelli was a man filled with evil and ego. But do-gooders don’t understand evil.

They can’t fathom that some human beings have no soul, and no amount of goodness programmed into them is ever going to change that. They don’t believe it, because they WANT to believe that people are good. They want to believe that given the chance to be better people, anyone would, of course, endeavor to make a better life for themselves.

Well, we have seen the failure of that kind of thinking, and governing over and over again in cop killings and senseless murders all across the country.

And yet, the do-gooders never learn. 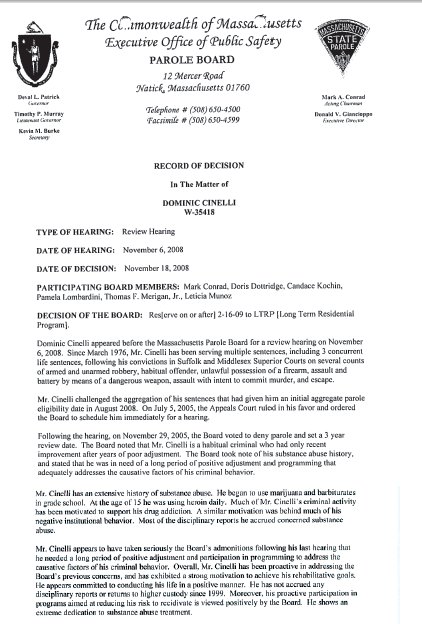 The Massachusetts Parole Board and their ineffective standards didn’t teach Mr. Cinelli how to be a better citizen or reject his violent ways. They didn’t teach him to respect the rights and lives of others. They didn’t cure the “causative factors of his criminal behavior”… they taught him how to be a better criminal. They taught him exactly how to manipulate the system, and how to turn a sentence of three life terms into freedom… and death.

Dominic Cinelli learned that all he had to do was speak the language of the converted. He learned that those who held his freedom in their very hands had a requirement that he only needed to show them he was changed by attending programs while in prison.

Programs that got him out of his cell and gave him something to do while he passed the time anyway. Programs which do not work on evil people and do not cure selfish, criminal minds.

He learned that if he acted as if he was rehabilitated, if he told the Parole Board what they wanted to hear, he could one day be victimizing innocent people again and ruining the lives of others.

And it worked…. and it will work again.

Because, after all is said and done, after the politicians pound their fists and talk about “parole reform,” after the media attention has died down, the only thing that will have changed are those things on the surface that the public can see.

No more will parole reports contain words like “casusative factors”, instead they will contain some other pithy language that is much more palatable to the public, while in reality the standards themselves for paroling violent offenders will change very little.

They will say “parole denied” but grant weekend furloughs, or they will simply call it something else when setting criminals free. That is what politicians and ideologues do!

My heart truly breaks for the family and fellow officers of Jack Maguire. Their road will be very long and their pain is only beginning. 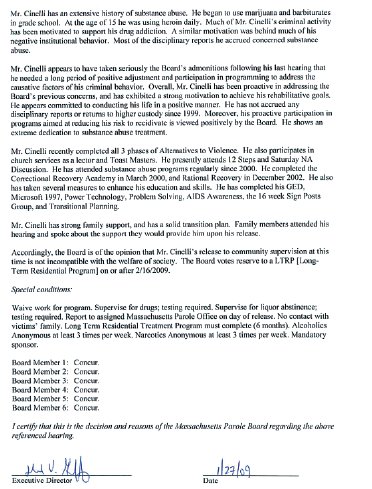 After all, this IS Massachusetts and the man who sits in the Governor’s office at this very moment has himself, defended a cop killer and does not understand evil.

Yes, the man who appoints judges and parole board members, Deval Patrick himself, once fought to the best of his education, training and ability to free a man who slaughtered a Police Officer in cold blood.

Rest in peace Jack Maguire, and the Jack Maguire’s of tomorrow who will be killed because do-gooders do nothing … while evil men laugh.

Tom Duggan is the president of Valley Patriot, Inc., a former Lawrence School Committeeman, a Police Survivor, the former political director for Mass Citiens Alliance and a talk show host on WHAV.net as well as a former radio host on WCCM, WCAP, WTTT, WROL and WEZE. You can email your comments to valleypatriot@aol.com

5 Responses to "The REAL “Causative Factors” of Cinelli’s Violence"