By Christine Morabito on November 17, 2012Comments Off on The Tea Party – Take 2 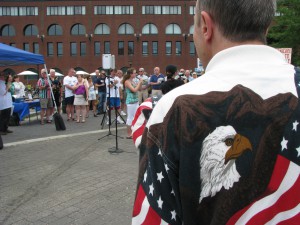 Rarely am I at a loss for words, but I feel as if I am groping around in the dark after an extraordinarily long and disappointing Election Day.

The November 6, 2012 election will be recorded as a major milestone in the life of the Tea Party, and the day we had been planning for since our birth. This I can assure you: We did not go away after 2010, and we have no plans to go away now. What has changed? Virtually nothing.

This is probably a good time to articulate the mission of Greater Boston Tea Party. We are a group of citizens who are concerned with the increasingly burdensome reach of government. Our mission is to educate and advocate for the restoration and defense of public policy that promotes limited government, free markets, free speech, individual liberty and personal responsibility, all tenets of the Constitution of the United States of America and the Bill of Rights. We advocate citizen engagement through civil discourse, community involvement and online activities that promote peaceful and productive social change.

At our founding, we made a firm decision to concentrate on the fiscal issues that most Americans agree on. Over the years, this position has been fiercely challenged by individuals who feel we should address social issues. These very social issues were used unfairly, but quite effectively against us in this election season.

Today I came across a Twitter post stating “I’m pretty happy that my uterus still belongs to me for the next four years.” As ridiculous as it was, the Obama campaign successfully convinced millions of women that, under a Romney presidency, their uteruses were in danger of being commandeered.

There is plenty to be outraged by.

From my vantage point on Election Day, it was immensely frustrating to see the reports of rampant voter fraud taking place all over the country, and be helpless to do anything about it. We will continue to advocate for voter ID laws and coordinate with True The Vote, a non-partisan, citizen-led initiative, forming a Massachusetts team to clean up our horrendous voter rolls. Unfortunately, our True The Vote databases were not available to us for this election, but will in the near future. You can sign up at True The Vote.

I find it hard to believe that we have become a society addicted to government entitlements. In real life I work as a psychiatric nurse and have counseled numerous individuals dealing with addiction problems. While it is true that addicts must hit “rock bottom” to begin recovery, I am constantly reminded that that bottom is relative. For some it might be losing a job, but others may have to lose everything before they ask for help. The Obama administration’s first term was the bottom for many people, in terms of losing their liberties. I have no doubt that a second term will be a wake-up call for millions of others.

Our saving grace may be Obama’s lack of a mandate for further radical change. He will also be acutely aware that his second term will define his legacy.

I would personally like to thank all the pro-liberty, freedom-loving candidates for sacrificing their time, energy and financial resources to run for state and federal offices. Individual Tea Party members worked tirelessly to help get these candidates elected, and their losses were heartbreaking.

We at the Greater Boston Tea Party will continue to work closely with the many Tea Party groups that share our goals and mission, such as the great folks from the Merrimack Valley and Worcester Tea Parties.

The Tea Party believes in putting principles above party. To that end, it is important to establish dialogue with our legislators, regardless of party affiliation. Yes, even in liberal Massachusetts, there are many fiscal conservatives on both sides of the isle.

To those who disagree with our fiscal conservatism, we hope to establish a civil dialogue. We are not the enemy. With all the vitriol over the past 4 years, few of us have the stomach to continue it. I believe most Americans want what is best for this country.

It is my sincere hope that we can work together to achieve it.