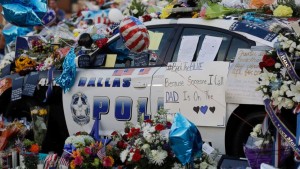 A long time ago … in a galaxy far, far away, I was a police officer for a few moments. I was proud to wear the uniform but I was well aware that I had no super powers at all. No cape that helped me fly, just a badge that made me a visible target. My brothers and sisters in blue knew that some in the community viewed us as the bad guys but we remained confident that most of decent society had our backs. I doubt that the same feeling exists on the thin blue line today.

Make no mistake, there is an ongoing war being waged against police officers in the United States. I wish that was a fictional comment at best or just hyperbole at worst, but the simple fact is that police officers are being targeted for murder in our country like never before.

When exactly did the men and women in blue become the enemy? Well, criminals have always regarded police as the enemy but that attitude has historically been the exception rather than the rule. Mothers and fathers taught their children to respect police officers. Trusting the local cop on the beat was what responsible moms and dads taught their sons and daughters. After all, the police officer was the good guy, right?

The image of the upstanding, sometimes heroic, police officer was portrayed in popular culture on a continual basis. Television shows like Adam-12 and CHIPS showed the routine lives of cops interspersed with bursts of unexpected excitement. Barney Miller showed the humor, sometimes of the gallows variety, that police officers use daily as a defense and coping mechanism. There were shows that also used a somewhat grittier feel like Hill Street Blues and NYPD Blue but ultimately, it was always clear that no matter how flawed some of those onscreen officers were they were ultimately trying to do good. I have to tell you, that the depictions are pretty close to the mark but pop culture today sends exactly the opposite message.

Politicians of all stripes traditionally shared the view of the police as good guys. Certainly some in public office had varying levels of support but Democrats and Republicans alike agreed with the idea that we could only live in a decent society when law enforcement efforts were strong. Sadly, this is no longer true.

For the past eight years or so, we’ve had a President who hates police officers. I realize it’s a pretty sweeping statement, but it is so clearly true that only the most partisan of uber leftists could possibly argue with it. From the moment that Barack Obama declared in 2009 that “the Cambridge Police acted stupidly” we’ve seen a non-stop assault on police officers launched from deep inside The Oval Office.

With the emergence of various cop-hating, race baiting thugs working together using the gang moniker of Black Lives Matter we’ve witnessed not just verbal attacks on police officers but actual physical attacks including murder, as well. Roving bands of hoodlums have accused police officers of randomly killing black men while at the same time ignoring the criminal behavior of those same young men. It’s an absurd position of course when presented to any rational thinking person, but it’s one that has been validated and encouraged by President Obama, Hillary Clinton, Bernie Sanders and other leaders of the left.

You surely remember those five heroic police officers who were slaughtered in Dallas. These officers, four from the City of Dallas and one from the Dallas Transit Authority, were targeted by a racist Black Lives Matter supporting man. Why were they targeted for murder? They were cops and they were white – nothing more, nothing less. At the memorial service for these heroes instead of offering any real measure of praise or honor for them, the President chose to make stupid jokes, speak incessantly about himself and then pay tribute to criminals who had experienced negative interactions with law enforcement; truly the lowest moment from a President who has had quite a few of them. Police officers lives are now at risk in a way we’ve never seen before and we can thank leftist leaders all the way up to the President for that. They are the generals in the war on police. I find them all guilty of having contempt for cops.

Jeff Katz is a former police officer. He has won multiple Associated Press awards as Best Talk Show Host. He can be heard on iHeartRadio’s Jeff Katz channel.