By ValleyPatriot on November 28, 2014Comments Off on The West Wing: A Look Back at TV’s Best Political Drama ~ TV TALK WITH BILL CUSHING 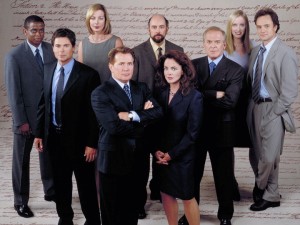 November is election month, and it made me think of TV shows that dealt with the political arena. There have been quite a few. Commander-In-Chief, Scandal, House of Cards, and on the comedy side, we’ve had Spin City, and Veep, among others.
But, in my opinion, the conversation begins and ends with The West Wing. The series was created by Aaron Sorkin, and ran on NBC from 1999-2006 for 156 episodes. It centered on the lives of the President’s senior staff and primarily took place in the West Wing of the White House during the fictional administration of President Josiah Bartlet.

Originally, creator Aaron Sorkin hadn’t intended to feature the President at all. The show was meant to center on the President’s senior staff with the President just making an occasional appearance. But producers were so impressed with Martin Sheen’s performance, they decided to make the President part of the main cast.

The West Wing premiered September 22, 1999 on NBC. Over its 7 seasons on the air, The West Wing earned 26 Emmys, including the award for Outstanding Drama Series for 4 straight seasons (2000-2003). The show was never a ratings giant, but gained critical acclaim for its realism, its superb writing, and its stellar cast. Former White House staffers praised the show for capturing the real feel of The West Wing of the White House. The series had many former Washington insiders and former White House employees on its staff of writers and consultants, which gave the show its realistic portrayal.

If you were a political or news junkie, as I am, you couldn’t help but be riveted by The West Wing. From its aforementioned realism, to its tackling of real world issues such as 9/11 and The War on Terror, the series kept viewers glued to their TV’s. While the series was occasionally criticized for making characters too morally pure, it was that characteristic that attracted many viewers. People wanted to believe that their government could be that way, and that their President could be like President Bartlet. Right from its patriotic opening music, you couldn’t help but feel proud to be an American while watching The West Wing, while at the same time, respecting the people that run our government and how hard that job can be.

The heart and soul of the show was Chief of Staff Leo McGarry, played by John Spencer. McGarry was a recovering alcoholic and lifelong friend of the President who convinces then NH Governor Bartlet to run for the Democratic nomination in the 2000 Presidential Election. Spencer died in the early part of the shows 7th and final season. His death was written into the show when his character, who was now the Vice Presidential nominee, died of a heart attack. Spencer won an Emmy for his role in 2002.
I really can’t do the show justice in the space I have here. If you love political drama, and you haven’t seen The West Wing, it is available to stream on Netflix. In my opinion, this series has to be in the discussion of the top 10 drama series of all time, do yourself a favor and check it out. Trust me, you won’t be disappointed.

Do you enjoy my columns? I’d love to hear from you. Do you have any questions about TV? Email me at BillsTVTalk@gmail.com. I will answer all of your questions and will feature some of the questions I receive in a future column.