By Paul Murano on January 29, 2019Comments Off on The Witness of the Unaborted ~ BENEATH THE SURFACE with PAUL MURANO 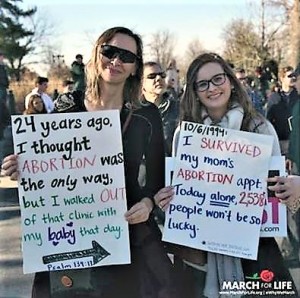 They say a picture paints a thousand words. No picture demonstrates this more than the picture included in this article.

This picture was taken at the last annual March for Life in Washington D.C.
Powerful pictures like this need no commentary. It speaks for itself. I will simply offer a little food for thought to complement your own contemplation.
January 2019 marks the 46th anniversary of Roe vs. Wade, which legalized prenatal homicide (abortion) in the United States.

Modern science and Mendelian genetics make it clear that human beings begin their lives at conception. It was stated unequivocally in biology books before Roe vs. Wade, and has never been refuted by science since then.

Since 1973, approximately one of every three people conceived and destined to live out their lives on earth, like the woman on the right in this picture, have been aborted before birth. As a result, around one-third of our population 47 years old and under today is tragically missing. Real people with real futures, snuffed out. It is no wonder politicians have bent over backwards to allow unbridled illegal immigration for the past forty years. Legal citizens alone are not repopulating the nation.

Putting aside the unspeakable evil of rationalizing murder, the 21st century has turned into a kind of alternate reality akin to the one portrayed in the movie, “It’s a Wonderful Life”. We are all familiar with this Jimmy Stewart classic, broadcasted ubiquitously each year during every pre-Christmas season. It illustrated how the whole world would change if one life was never lived. Imagine how the world has changed without the 60 million lives killed before birth since 1973? That is a rhetorical question. It is impossible for the imagination to grasp the profundity of the impact the world has endured due to this abortion era. The loss of life and spiritual stench of death it has wrought deeply affects us all – despite any lack of awareness we may have.

A false understanding of liberty and a societal addiction to the sin of fornication enable the mainstream media and Democratic Party to perpetuate this big lie. Planned Parenthood continues to make ample money off killing preborn children, those who have bought into the narrative are unable face the truth about what they have done.

This is a predictable result of the combination of a loss of faith in the transcendent and the advancement in technological ability. Where there is money to be made or sex to be had, reason and science take a back seat. Not even murder will stand in the way of the faithless if there is perceived self-benefit. When love of God is lacking, the most vulnerable become victims after a slick campaign to dehumanize them. With the foolish, infinite Justice does not elicit holy fear and infinite Mercy does not inspire contrite repentance.

So, where does this leave grown-up fetuses like the mother and daughter in this picture? What do grown-up fetuses like you and I do in the midst of this tragedy and injustice? How do we love our enemies while hating the grave injustice they continue to rationalize and perpetuate? Those are the important questions we need to ask ourselves, and about which we need to pray.

Paul Murano is a college instructor and talk show host of Beneath the Surface on WCAP 980 AM. Podcasts available at

https://archive.org/details/@veritas777. Paul has graduate degrees in philosophy, theology and is certified in health care ethics. He speaks on topics relating faith and reason, and plays oldies at local venues as a one-man band. E-mail Paul at PJDM@aol.com