By ValleyPatriot on November 3, 2017Comments Off on This is What Heroism Looks Like ~ FROM ISRAEL TO THE VALLEY PATRIOT 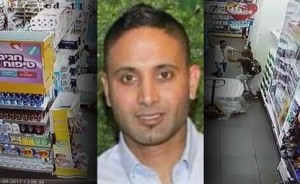 A regular man, Niv Nehemiah would have preferred to remain anonymous. His family takes no comfort in being told that he is a hero. They want him to heal, to stop being in so much pain.

Two months after the terror attack in the Yavneh grocery store, where he works, everything is a challenge. He can now walk with support. Slowly, painfully. His speech is improving.
The knife that plunged into his head and his neck, ripped his vocal cords, missing the jugular by millimeters.

Real heroes don’t look like comic book super-heroes. They aren’t necessarily big, strong or muscular. They are people, uncomfortable with the title. When told they are heroes, they tend to blink, look away and then say: “I just did what I had to do.” Or, like WW2 veterans say: “the heroes are the ones that did not come home.”

When asked about his heroism, Niv says simply: “I’m not a hero…. The main thought I had in my head was that I am fighting for my life for my children and my wife.”

When asked if he had to relive the attack, would he choose to run away, Niv answers: “No. The instinct is to fight, for your family.”

The signs of his injuries still very visible, Niv is in obvious pain. For him, the battle against the terrorist is not over. He has difficulty swallowing. The things we do with ease, without even thinking about them are difficult for Niv and yet, he has decided that he wants to attend the trial of the terrorist.

When asked why, Niv explains: “It’s not to show that I won, that I am out of this a ‘hero’. It is to show the people of Israel that we stood against terror and won.”

It is not easy to look your would-be murderer in the eye. It is not easy to look calm and dignified when you are in pain. Niv’s personal battle is now to heal but yet again he is thinking of something bigger than himself. During the attack, it was his family. Now it is his Nation. His indomitable spirit will not accept anything less than victory.

Beware the person who claims the title of hero with ease and with pride. They are not worthy.

Courage is usually considered to be lack of fear but that is not true. Niv’s courage during the attack came from terrible fear of never again seeing the people he loves most. Niv’s courage to stand in front of his attacker, to show that although the terrorist broke his body he could not break Niv’s spirit – that comes from sheer determination.

Heroism is not about being stronger than other people; it is about loving something more than yourself.