By Tom Duggan on May 2, 2017Comments Off on Tom Duggan’s Notebook – 13th Anniversary BASH! Edition

NOW THAT WAS A BASH!!

This year The Valley Patriot celebrated our thirteenth anniversary with the biggest BASH we have ever thrown. Thanks to our advertisers, BASH donors, and BASH attendees we packed the Fireifighters Relief In again with more than 500 people to recognize some really special people. I hope you will take a few minutes to flip through the pages of this month’s paper and read their stories of why they received their awards or scholarships.

This year, seven high school students in attendance walked away from this years BASH with $1,000 each to further their education. The Valley Patriot awarded scholarships to two students from Lawrence High School, one from the Greater Lawrence Technical School, two students from Central Catholic (thanks to a $2,000 donation from Joe and Rosanna Zingales of Team Zingales Remax), and two $1,000 scholarships given by the Methuen Police Patrolman’s Association and the Methuen Superior Officers Association.

BASH LINE OF THE NIGHT 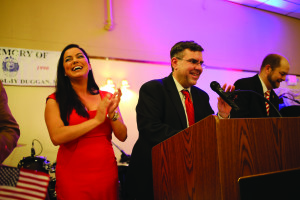 Weatherman Al Kaprielian got the crowd going by instructing them to say “Good Evening” in his high pitched voice every time someone says “good evening” at the microphone for the rest of the evening. To make sure they got it right he had the left side of the room repeat “Good Evening” and the right side of the room repeat “High Pressure”. At one point the audience got it wrong and Kaprielian mumbled to himself “Geesh I feel like I’m back in Derry.” The mic picked it up and the crowd roared with laughter. 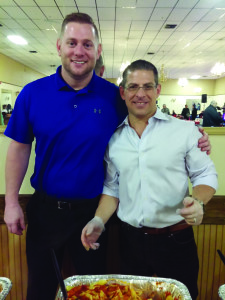 At the beginning of the night, I took to the microphone and nominated Jana DiNatale for a 1st Amendment Award for next year’s BASH. I also nominated Michael Agricola, owner of Salvatore’s Italian Restaurant in Lawrence and Joe and Rosanna Zingales of Team Zingales of Team Zingales Remax for a Valley Patriot President’s Award. This year Mr. Agricola donated a gourmet meal for our BASH at the Firefighers Relief’s In, saving us enough money to give out one additional scholarship this year. Joe and Rosanna Zingales-Lopez donated $2,000 total for two scholarships given out this year. If you are a loyal reader of this newspaper I ask you as a personal favor, to patronize our advertisers and our BASH sponsors. They truly make this community a better place and do so at great personal sacrifice. 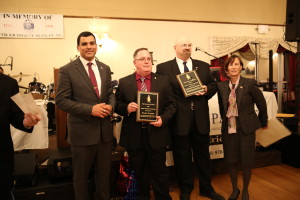 Thank you to Rick Bellanti of Bell-Aire Music & Entertainment for donating his services and being a member of the BASH committee. Comedian Johnny Joyce, who is a veteran (USN) donated his time to tell some funny stories and will be back again next year with a much bigger role. Melvern Taylor who wrote the song “Paying Attention” for my radio show and then put it on a record always opens the show with the song live and that always sets my night off right!

MTV’s Brittany Baldi donated her time this year to help us award scholarships to high school students and gave them advice for success. Hollywood actor Steve Blackwood, who is also an accomplished jazz singer, donated his time to perform at the beginning of the night with our good friend and sax player Derrick Feole.

The BIG guy of the night was once again our good friend and weatherman Al Kaprielian. It turns out that Kaprielian’s father Sorap is a WWII veteran. Our MC Toni Wakester presented Kaprielian with a signed copy of our new book “Heroes in Our Midst, from the Pages of The Valley Patriot”.

SPEAKING OF OUR MC 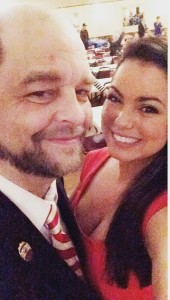 Each year since our first BASH, PuppyGirl Kate Whitney has always been our MC. This year she learned less than a month before the event that she was unable to attend. So, we reached out to a veteran who also works in law enforcement named Toni Wakester to fill in and she did a great job. With almost no prep and not having attended any BASH meetings, she was able to bring grace and class to the party and I speak for the entire BASH committee when I say that when PuppyGirl returns next year we will have a very large role for Toni now that she has survived the trial by fire! 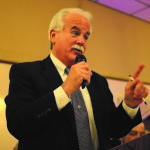 I couldn’t think of a better person to be our keynote speaker at this year’s BASH than newly sworn in Essex County Sheriff Kevin Coppinger. Coppinger gave praise, and a few zings to law enforcement, but really silenced the crowd when he read the first Officer Tom Duggan Public Safety Award Winner of the night as Methuen Fire Chief Tim Sheeny. I hope everyone goes on YouTube and watches his presentation.

The only reason our annual BASH takes place is because I have a legion of volunteers always dropping in to help out. Among the best of these are those who volunteer for our BASH committee to plan our annual event. They are: Maria Fiato, Chris Eldredge, Brenda Rozzi, Rich Russell, Beverly D’Amico, Kevin Leach, Keith Wlodyka, Rick Bellanti, Dan Selenius, Jen Jones, Beth D’Amato, Denise Donlan, Eric Melanson, Sandra Jean, and honorary member Mr. Brenda Rozzi.

Each year we allow veterans of any branch to attend the Valley Patriot BASH for free. This year members of the community stepped up and donated the cost of ten tables for veterans to attend. Donating $300 each for a veteran table were: Stephen Buco of Buco & Sons Gen. Contractors, Karen Montijo, Community Dentists on Essex St. in Lawrence, Katie Cook of Comfort Home Care, Methuen Police Chief Joe Solomon, Jim Rappaport, The Coffee Cann, Cheryl White, Diane O’Gara, Cyndi Rosa Montello, Natasha Young, JT Torres, Martineau’s Towing, and Quintana Supply, Newton, NH. THANK YOU for caring for our veterans!!