By Tom Duggan on May 26, 2013Comments Off on TOM DUGGAN’S NOTEBOOK: Lantigua, Ed Markey, Gabriel Gomez, Frank Cousins and MORE! 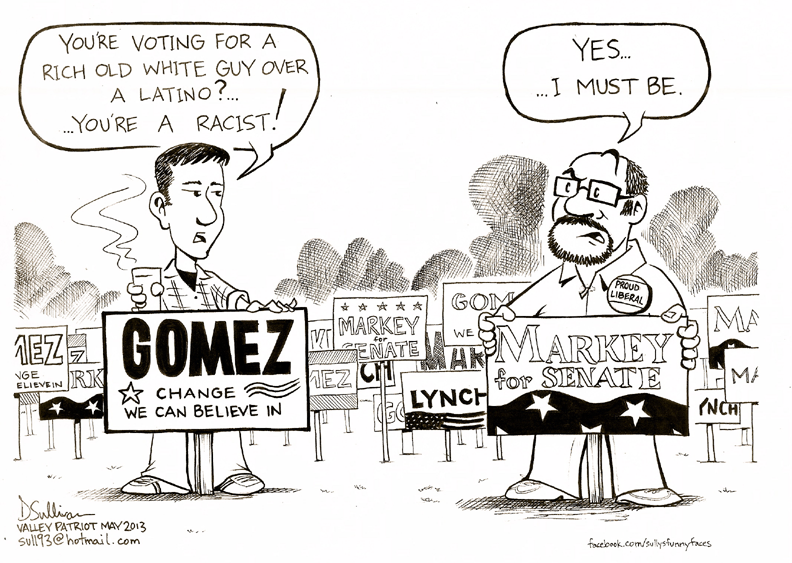 RICH OLD WHITE GUY VS YOUNG VIBRANT LATINO … WHATS A LIBERAL TO DO?

For 25 years, the news media and the democrat party narrative has always been to get voters to have a knee jerk, emotional reaction to a race. The narrative has always been “rich, old, white guy equals bad” and “young vibrant minority equals good”. But now, the Democrats have a problem because their candidate for United States Senate is Ed Markey, the rich, old white guy and his Republican opponent is the young, vibrant, Latino Gabriel Gomez. What’s a liberal to do? I mean if you consider yourself a liberal and have bought into the decades long narrative that we need minorities to represent minorities in government, then how can you possibly vote for the rich, old, white guy over the young vibrant “new ideas” Latino? Well you could close your eyes and pretend the Markey campaigns fairytale of Gomez being “Karl Rove” or an “extremist Tea Party” candidate. But deep in your heart you know that’s not true. The fact is, if the Democrat Party leadership really cared about minorities, especially Latinos, why didn’t THEY nominate a Latino for the U.S. Senate seat? And now that we are on the subject, the news media and the Democrat Party have routinely held the position that those who voted against Obama or Deval Patrick must be racist. I wonder how it will fly now that the tables are turned? I mean, if you are a liberal and you vote against Gabriel Gomez in favor of Ed Markey you must be a “racist” right? I am going to thoroughly enjoy watching the race baiters in the Democrat Party try to nuance their way out of this one. They set up the very construct (phony though it may be) that could cost them a seat in the U.S. Senate this year. He who live by the sword ….

Congressman Ed Markey is now the Democrat nominee for United States Senate in a race against Gabriel Gomez to fill John Kerry’s vacant seat. On the night of his primary win however, Markey dusted off the DNC talking points from the last election, forgot to adjust them to suit his opponent’s bio, and began to hurl bizarre accusations against Gomez.

First, he accused Gomez of being part of the Karl Rove, Republican conspiracy … when there is no evidence that Rove even knows who Gomez is. Then he heaped on the party lie about how Gabe Gomez was the Tea Party candidate when the reality is, at the time Markey was making his speech, Tea Party activists were drowning in their sorrows at Mike Sullivan headquarters pledging not to support Gomez in the final election. But, facts are not relevant in an election because the people who are supposed to fact check candidates (the news media) doesn’t seem to care about facts as long as it’s the Democrat candidate telling the lie.

DEMOCRATS AND ANOTHER RICH WHITE GUY

And now that we are talking about race, isn’t it interesting how people like Deval Patrick and the Democrat leadership on Beacon Hill talk about “proportional representation” at election time. They give speeches extoling the virtues of appointing “minorities” to government positions, and that those who do not agree are “racist”. They never seem to live up to their own standards, do they? One example is Jeff Riley, receiver for the Lawrence School System. With 90% of the Lawrence school children being Latinos, and a large majority of those students being Dominican, the man appointed to oversee that schools in Lawrence is another rich, old, White guy. Someone who (according to liberal doctrine) cannot understand what it’s like to be a poor inner-city Latino trying to learn in such an oppressive environment. How can he relate? How can he possibly represent them? This is just more proof that even the Democrat leadership in Massachusetts doesn’t believe their own myth of “proportional representation. All I know is, at the end of the day, Deval Patrick is appointing White guys to oversee Latinos. He is appointing White guys to oversee blacks. He is supporting a rich, old White guy named Ed Markey over a “Latino” Gabriel Gomez… and all with a straight face, while they lecture us about proportional representation.

The Merrimack Valley’s most successful “community activist” Lawrence Mayor Willie Lantigua didn’t bother to vote last in last month’s Primary for United States Senate. I’m sure Willie had much more important things to do that day, but how can you be a role model for young Latinos in Lawrence if you don’t even bother to vote?

SHERIFF COUSINS CAUGHT WITH HIS PANTS DOWN … AGAIN

Last month there was yet another escape from Essex County Sheriff Frank Cousins custody. On April 25th inmate Reford Watkins (DOB: 01/04/1978) failed to return to the minimum security facility called “The Farm” on Marston Street in Lawrence. Watkins was on a work detail at the Haverhill Country Club on the night of April 25th at 9pm but refused to return (on the honor system of course) to prison. The Valley Patriot reported the escape the next day thanks to information we received by confidential sources in the Sheriff’s Department. Sheriff Cousin’s office, however, did not notify the public of the escape as mandated by law, until a full 48 hours after Watkins fled. This was a full 24 hours AFTER The Valley Patriot reported it on our Facebook news page, embarrassing the Sheriff once again for not telling the public of the escape. At least we have progress though. Up until this most recent escape, Cousins refused to notify the public, even after we broke news stories of an escape from his facility on our news page.

Watkins was convicted of assault and battery with a dangerous weapon and vandalism. He is still at large.

Essex Superior Court Judge Cornetta has ruled once again that the City Of Lawrence must turn over documents requested over a year ago by the Valley Patriot. “This is about transparency,” Cornetta told the city’s high priced Boston attorney from Foley and Hoag. “The information Mr. Duggan is asking for must be presented. I think your client should get that by now, Mr. Duggan is not going away. The statute is clear, the press and the public have the right to know what their tax money is being used for …. I’m going to give your client two weeks to produce the documents Mr. Duggan has requested.”

It looks like there is light at the end of the tunnel, and we are finally going to get all the documents we requested in February of 2012. But don’t ever count on Willie Lantigua to do the right thing. A full report will be published next month.

During the week of the Boston Marathon Bombing and the search for the Muslim Terrorists The Valley Patriot Facebook Page was constantly being updated with minute by minute updates on the situation. According to our stats page, on the night of the terrorist’s capture we had more than 46,000 people logged on to get news updates from the Valley Patriot. In addition to that, we had nearly 98,000 people following updates on Tom Duggan’s personal Facebook page, and another 22,000 people logging on to valleypatriot.com to get their news. We want to thank all of the police, fire and emergency responders, as well as the medical personnel in the Boston hospitals and our on the ground news spotters who fed us second by second information on the multiple incidents going on that week. THANK YOU to all of those who helped and all those who followed us.