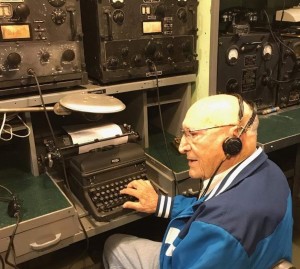 Tony was attending a family wedding with his mother when the news came in on the Japanese attack on Pearl Harbor. He recalls the news of the attack came over the car radio while driving his mother to the wedding. Later, gathering at a local social club with his friends and neighbors in Chelsea, the young men were all discussing the attack, talking about enlisting, and what branch that they wanted to serve in. He served during World War II in the Pacific theater, with the US Navy as a Radioman First Class.

His wife, Loretta, was trained as a nurse after graduating from high school, back when hospitals, not universities trained nurses. Anticipating huge casualties invading Japan, the US Government paid for Loretta’s nursing education.

Consider this fact regarding those anticipated casualties: during World War II, 1,506,000 Purple Heart medals were manufactured, preparing for an estimated 1 million US casualties, that were expected from a planned Allied invasion of Japan in the fall of 1945 or winter of 1946. Today the total number of the combined American military casualties for the seventy years following the end of World War II have not exhausted the supply of Purple Heart medals ordered for the invasion of Japan. This includes totaling up all servicemen and women with injuries or fatalities from all terrorist attacks, wars, and conflicts.

Several years ago, I met a man who, during World War II, was an 18-year-old US Marine on a Troop ship, headed to a staging area in preparation to invade Japan. Considering his position, I asked him what he thought of Truman’s decision to drop two atomic bombs on Japan. “Greatest president ever” and “I’d vote for Harry Truman today” was his reply!

Tony’s first ship, the USS Manlove (DE-36) was an Evarts-class destroyer escort built for the United States Navy during World War II. The Manlove was named after a sailor killed on the USS Arizona (BB-39) during the Pearl Harbor attack. This ship served in the Pacific theater during the war, her mission was to protect convoys and other ships from Japanese submarines and fighter aircraft, earning five battle stars defending Norman Rockwell’s “four freedoms”.

Designed to hunt and sink enemy submarines, a staggering number were built by the United States in just a few months during World War II with a total construction of 437 ships built to serve as Destroyer Escorts. Veterans of just a few months service on low hull numbers, such as Tony’s DE-36, were transferred off their escorts to commission and crew newer ships.

Tony became a “double plank owner”, transferring to the USS Belet (APD-109/DE-599) which was another United States Navy destroyer escort and a ship that would later serve the US Military as high-speed troop transport in that role from 1945 to 1946 returning US Troops home after the war. The ship later was sold to Mexico and served in the Mexican Navy until 1972.

When I met with Tony, I asked him if he still remembered the Morse code, that he used in the radio room all those years ago, to which he immediately started “speaking” in code. Almost 75 years have passed, yet this remains engrained in him from his time spent in the Navy. Like the rest of his generation, Mr. Marino downplayed his role in helping to save the world. Tony’s granddaughter, Robin Drouin, a nurse like her grandmother, wrote me, and told me that at one of their ship’s crew reunions in the 1990s, Tony’s skipper brought an official US Navy letter, that actually confirmed, and gave the ship credit for the sinking of a Japanese submarine!

Both before and shortly after the war, Tony worked for the railroad, the Boston and Albany and the New York Central. Preferring electronics to cleaning and icing dining cars, he went off to school to learn the trade. Tony left his well-paying railroad job, taking a risk, and entered the electronics industry, which was in its infancy in the 1940s and 1950s. He retired from AVCO in Lawrence, Massachusetts. 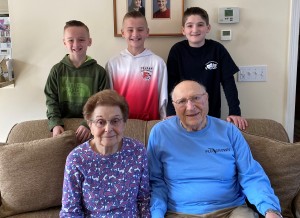 Loretta and Tony have a son and a daughter, four grandchildren, and ten great grandchildren. I had the pleasure and honor to meet some of them.

As I sat with three generations of Tony’s family, I realized that it was for them, his children, grandchildren, and great-grandchildren, that he and his friends saved the world seventy-five years ago.

Several years ago, before any of us knew what the Wuhan Flu (Covid-19) was, Tony wrote in one of his scrap books: “I believe as one gets along in years, you think about all the problems that people all over the world are facing, and living in a civilized world, you wonder how this could happen? Will we ever be able to solve these problems so we will have a safe world in which to live.”

The Greatest Generation speaks! While Tony is one of the 16.5 Million American Heroes who served in World War II, his granddaughter Robin Drouin, the co-author of this article, is a Registered Nurse, and currently serving on the front lines in our Nation’s battle with the Wuhan Flu, also known as Covid 19. She is a “double hero”, a nurse and a mom!

One Response to "Tony Marino, US Navy Pacific Theater – World War II – VALLEY PATRIOT OF THE MONTH, HERO IN OUR MIDST"