By Tom Duggan on July 2, 2011Comments Off on Town Manager Rees Takes Job in Maine Selectmen say they have big shoes to fill 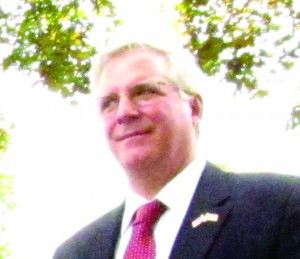 After ten years of managing the Town of North Andover, Mark Rees has taken a job as the city manager of Portland Maine, leaving members of the Board of Selectmen looking for a new manager with what they called Rees’ “financial genius and even temper.”

Selectman Dan Lanen said it will be hard to replace Rees, “I will miss Mark, he did a great job managing the town. I really think North Andover would be in big trouble right now if we didn’t have Mark there managing the budget during all these local aid cuts. Unlike most other cities and towns, Mark managed to balance the town budget and not lay off any public safety officers. That’s pretty amazing when you think about it. He is great with numbers and as we go forward we are going to have to find someone who has a lot of experience in municipal finance.”

Lanen said working with Rees was easy, “It was a pleasure working with Mark, he’s always been professional, he’s been able to be a voice of reason when things get heated, when things got political. He never took anything personal; he had the perfect temperament for this job. We have big shoes to fill!”Don

Selectman Lanen is not only a member of the Board of Selectmen but also works for Rees as a North Andover Police Officer. “He was easy to work for as a town employee, he let the police do their jobs and didn’t interfere.”

Selectman Tracy Watson agreed with Lanen, “Well yeah, talk about big shoes to fill. Mark has overseen some major projects and issues facing the town and he did it with the utmost professionalism. The budgets trash fees, school issues, whatever came up he was the guy I was glad we had managing things,” Watson said.

“He’s been an asset here for 10 years,” she continued. He’s the longest town manager we’ve ever had and I don’t want to lose him, but we don’t want to hold him back, either. He always wanted to be a city manager and now he is going to get his chance before he retires.

Mark has this opportunity and he took it, so it’s time for him to move on and realize another one of his career ambitions.”

“Look at how many layoffs we have had compared to other cities and towns. He kept the ship afloat facially and found a way under very tough circumstances to work with what we have to make ends meet.

“Look at other communities, they have had tremendous cuts in state aid as we have, but he managed it with minimal impact on town services. Look at the projects he’s gotten done. Look at the infrastructure, the new police station, two water treatment reservoirs, refurbishing schools, building a new pre-k school, maintaining sewer and water systems and keeping them in top shape, there’s a lot he has to celebrate as he leaves North Andover. I don’t know how we are going to find another Mark Rees.”

Selectman Don Stewart said that he was on the Board of Selectmen when Rees was hired to manage the town and admits it was one of the best votes he ever took.

“I was on the board when we hired him back in 2000. Even back then you knew he had a great financial mind. As far as budgets are concerned he has gone as far as he can in North Andover. I’m happy for him it’s a great challenge for him to go to Maine and I know it was one of the things he wanted to do before he retired.

Thanks to Mark our bond rating remains really high. I am sure the people in Portland realized his financial expertise looking at his credentials here in town.

It also helps when you have a town manager who understands the importance of having a good relationship with the Board of Selectmen and we did have a good relationship. Someone like that makes it easier for things to run more smoothly. He always seemed to have the answers for us even if it wasn’t the answers we wanted.

Stewart says that there were times when he and Rees sparred over financial issues but admits looking back, that Rees was more right on those issues than he was.

“He made all the right financial decisions, even where I disagreed with him sometimes, like I didn’t want to raise fees but when it all comes out in the wash he was right about raising the revenue for the town it was something we had to do. It’s great when you have faith in your town manager to do the right thing, we did have faith in Mark and he did all the right things for the town. I wish him all the best.”

Selectmen said that the search will now begin for a new town manager and it’s not going to be easy. “I think he has 90 days under his contract we will negotiate up to 90 but we will give him the leeway he needs,” Selectman Lanen said.

“What we are looking for now is someone with very strong finance experience,” Selectman Watson added. “That’s a huge part of that job. I think we got spoiled with Mark and when he is gone a lot of people will look back and realize how spoiled we really were

“What’s important now is to find someone who can come in with an understanding of how to deal with ongoing projects and setting goals and objectives for the town. Someone who can figure out the towns long term and short term master plan issues, capital projects where growth is going to be how we are going to address the day to day issues facing the town.”

Stewart said that he was unsure how the process of picking a new town manager would proceed. “Years ago the selectman picked people from the community and they sat on the screening committee.

Then selectman decided from there.”

Watson said that the most immediate need now was to find and interim town manager while the board goes through the process of finding a permanent replacement for Rees.

Members of the board said that Rees almost never took sick and vacation time. “He was there every day, sometimes till 9 o’clock at night. He put in more than 60 hours a week. He put his heart and soul into the job. Portland is lucky our loss is their gain.”