By Paul Murano on May 24, 2015Comments Off on Trans-Jenner-ism ~ Beneath the Surface with Paul Murano 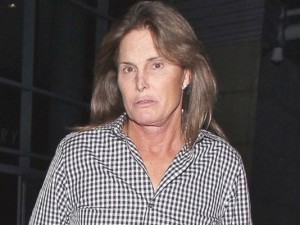 Encouraged by the Bruce Jenner interview with Diane Sawyer, I now announce that I am a transracial American. Yes, I am a black man trapped in a white man’s body. Since childhood I would secretly talk black, dress black and listen to black music. I have yet to go through melanoma treatments and racial reassignment surgery, but from now on I plan to take full advantage of my minority status for affirmative action purposes, and will sue anyone who challenges my self-declared identity. Being black corresponds to my inner feelings, and therefore you have an obligation to accept me as who I say I am.

The above paragraph is obviously satire. It is written to display the absurdity of leftist ideology, which is based on three premises: 1) We should be labeled by how we feel; 2) If we declare it, it is so; and 3) Society must comply with said declaration. And there’s also a fourth: This only applies to issues of sex.

First, the facts:If a person is born male, every cell in his body is male, and the same applies to females. It is the Y chromosome or lack of it that dictates a person’s sex.

The rare XXY syndrome still produces a male by virtue of the Y chromosome, and the very rare intersex condition that manifests sexual ambiguity makes up only 0. 018% of the population (Leonard Sax, MD, PhD). Physical ambiguity is not what the “transgender” movement is about, but rather gender dysphoria. It attempts to separate sex from “gender” to declare one’s self different than one’s body. So when Bruce Jenner says he feels like a woman in a man’s body and proclaims on national TV, “I am a woman,” he is speaking of his “gender,” not his sex.

This is not only a false body-person dichotomy, but it also demands the public accept one’s chosen “gender” (not their sex) as their sexual identity. Yet, the fact remains that even if one were to have excessive hormone treatments and undergo sex reassignment surgery, one remains the sex he or she was born. Every cell of the body (save their gametes) scientifically proves that. Declarations to the contrary and cosmetic physical alterations do not change reality.

There is irony in the fact that the larger ideology that includes “transgenderism” would never take seriously the claim supplied in the above satire. That would not fly because the brand of insanity that attempts to redefine reality only applies to matters pertaining to sex. For example, there is literally a community of people who consider themselves transspecies, feeling like they are a particular animal in a human’s body (http://en. wikipedia. org/wiki/Species_dysphoria).

No one takes their claim seriously. There is also a growing number of people with other types of dysphorias, such as those who self-identify with persons who have lost a limb, and seek surgery to remove a healthy arm or leg to fit their self image (www. theatlantic.

om/magazine/archive/2000/12/a-new-way-to-be-mad/304671/). We see these people as needing help. Additionally, there is the more common body dysmorphia of the dangerously thin person with anorexia who sees a fat person when looking in the mirror. We see each of these as psychological problems that need healing.

Why, then, has the cultural left decided to continue respecting objective reality on those types of dysphorias that are not related to sex?What is it about sex that makes the left target it as its experimental project to manipulate and redefine at will?

I propose the problem is more than just fallen man seeking pleasure without consequences. It goes deeper. Sex gives life, and leftist ideology, at its core, is a death wish.
This is why the cultural left champions abortion and euthanasia, and also seeks to render meaningless the natural connection between sex and babies.

This ideology, which has permeated every level of our culture, is the suicidal tendency of society. Its predominance explains why the culture vehemently abhors chemical pollution and physical domination of the planet, but enthusiastically embraces chemical pollution and mutilation of the body in people — but only when it pertains to sex. We soundly condemn perversions of earthly nature that stifle wildlife, but enthusiastically embrace perversions of human nature that stifle human life; such as contraception, homosexual acts, sterilization, and transsexual surgery. We do not consciously admit this inconsistancy because the entire foundation of secular humanist ideology is built on denial.

So, I caution you as I caution all of us:Whenever you find yourself falling into the media-driven narrative, which depends on displaced compassion and a false sense of liberty to uphold its suspension of sanity — a narrative that embraces Jenner’s decision on transgenderism and the courts’ decisions on “same-sex marriage” — catch yourself. Don’t allow yourself to contribute to the abuse of people who need real help (HERE). Don’t become an instrument of our civilization’s gradual suicide (HERE).