By ValleyPatriot on April 7, 2018Comments Off on Troopers Catch Hit and Run Driver in Lawrence 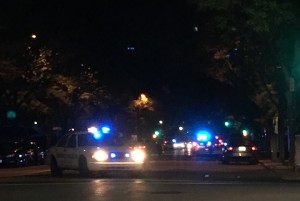 The Lawrence Police Department received a call shortly after 1AM Saturday morning for report of a Massachusetts State Trooper on the scene of a hit and run at the intersection of Jackson and Essex Street.

The victim was struck while walking in a crosswalk by a black motor vehicle traveling East bound on Essex St. The victim was thrown approximately 50 feet, sustaining serious injuries.

The motor vehicle fled the scene and was located quickly by Massachusetts State Police at the intersection of East Haverhill and Vine Streets. The vehicle had front end damage and a broken windshield.

The alleged suspect, identified as 24 year old Methuen man, John Quiceno, was placed under arrest, transported to the Lawrence Police Department and booked.

He has been initially charged with O.U.I. and leaving the scene of an accident causing personal injury, further charges may be forthcoming.

The victim is a 30 year old female from Lawrence was initially taken to Lawrence General Hospital for treatment and then transferred to Beth Israel Hospital in Boston .She is undergoing surgery for her injuries.