By ValleyPatriot on January 25, 2014Comments Off on Tsongas invites Lawrence Mayor Rivera to represent 3rd District at State of the Union 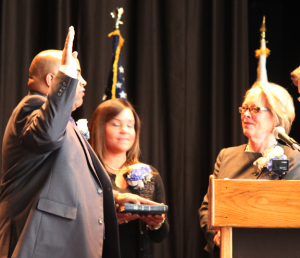 Tsongas invited Rivera, who was recently sworn in as the new mayor for the City of Lawrence, to represent the Third District at the President’s annual address to Congress. Mayor Rivera represents one of the Third District’s largest communities and one that has been hardest hit by the economic downturn.

Congresswoman Tsongas and Mayor Rivera hope to hear firsthand what the President has planned to assist communities such as Lawrence and many others across the Third District.

“Mayor Rivera will attend the State of the Union as a representative for Lawrence, and for all the communities in the Third District looking to continue the steady climb towards fiscal stability and growth,” said Congresswoman Tsongas. “I invited him to hear firsthand, along with myself and all members of Congress, the President’s plan for addressing key issues that will assuredly impact our region, such as job growth, increased educational opportunities and immigration reform. His attendance signifies my own commitment to continued partnerships with those officials, organizations and individuals who are sparking change all across the Third District through innovative and creative solutions.”

“An Army veteran and son of an immigrant, Mayor Rivera is reflective of so many Americans who rely on hard work and perseverance to achieve their goals,” Tsongas continued. “I anticipate that the President will discuss a strong agenda focused on supporting middle class American families – like those struggling each day in Lawrence and elsewhere. It is my hope that this experience in Washington, D.C. will inspire new ideas for progress and intergovernmental collaboration, which Mayor Rivera can bring home to the Third District and put into action.”

“This is a great opportunity to hear the President speak about issues that have a significant impact on Lawrence and our region: how to grow jobs and keep businesses here in America,” said Mayor Rivera. “I pledged to focus on middle class disparity issues and help make Lawrence better. I believe the President has a similar vision for America’s gateway cities. I’m looking forward to hearing more about that commitment in person. Possibilities abound for the City of Lawrence and partnering with the Congresswoman and the federal government will help us make them reality.”

The Congresswoman and the Mayor will be available for media interviews to discuss the State of the Union, both before and after the event. To schedule an interview, please contact Michael Hartigan at: michael.hartigan@mail.house.gov or 202-225-3411.