By ValleyPatriot on August 1, 2017Comments Off on Turning Lucifer into Lucius ~ ROBINS KITTY CORNER 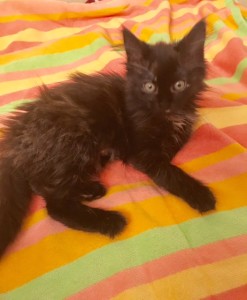 When you rescue kittens that were born outside, chances are very good that they will need some degree of socialization, or taming. Kittens born in the wild are fearful of people and will hiss and spit and run away when approached.

If you are lucky enough to capture the kittens when they are between 4 and 6 weeks old, the taming process will be fairly easy and shouldn’t take much time. Kittens that are 8 weeks old will present more of a challenge, but are usually not that difficult to work with. Socializing older feral kittens is a different story.

Enter Lucifer. When he and his 2 siblings arrived at the MSPCA they were about 10 weeks old. While Lucifer’s siblings were fairly friendly, Lucifer was not. He was a hissing, spitting, biting machine. Although Lucifer was young, he was not a good candidate for adoption due to his temperament. He needed work. Lots of it.

He was placed in a foster home with Jennifer Taris, a knowledgeable and experienced volunteer who has fostered many cats in the past. She immediately gave him his moniker and placed him in a crate in a quiet room. His 2 siblings were placed in another crate in the same room. From the outside looking in, it seems cruel to keep an animal in a cage. This is done only as a temporary measure during the socialization process to allow the caretaker to work with the kittens.

For the first couple of days, Jenn simply fed and watered Lucifer to give him time to get used to his surroundings. She did not try to approach him or touch him. After a week, she was able to let Lucifer’s siblings out of their cage so they could explore their surroundings. Lucifer carefully watched as Jenn picked up each one of his siblings and played with them every day in his presence. He did not show any interest in participating, but he could clearly see that they were safe and having fun. Jenn put treats in Lucifer’s cage every day to tempt him to come closer to her. One day, he got up enough courage to touch Jenn’s finger with his nose. Jenn continued to give him treats while speaking softly to him daily. Eventually, she had him eating out of her palm.

The time had come to start handling Lucifer. Jenn picked him up briefly, held him close, and then returned him to his cage. She did this day after day, week after week, slowly increasing the length of time that she held him. He continued to greet her with hisses daily. She did not give up. Six weeks later, Lucifer began to purr.

Jenn’s other family members also helped with the socialization process. It is beneficial for kittens to get exposed to others and to get used to more than one person. Jenn’s children would play with Lucifer through the bars of his cage to give him some stimulation. Over time, his cage was left open so he could be with his siblings and explore his surroundings. Jenn continued to hold him on a daily basis and the children continued to play with him and interact with him.

Four months later, Lucifer was ready to be adopted. His new family chose him on New Year’s Eve. They brought him home and introduced him to their other cat “Goldenman”. The two quickly became friends. It was time to change Lucifer’s name to something more fitting. That’s how Lucifer became Lucius, a Roman word which means “light”. The name says it all.