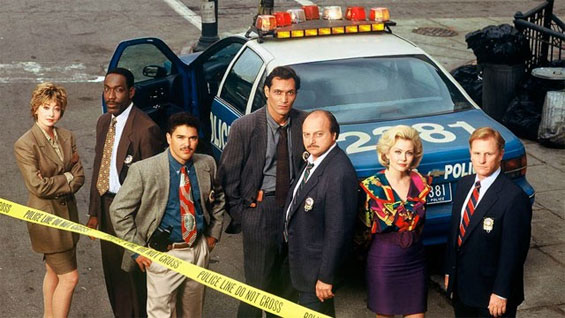 September 21, 1993. The face of television changed that day. It was definitely a change for the better. A change toward more quality programming on the major networks. That was the day that a show called NYPD Blue premiered on ABC.

Cable networks had started to produce original content and started airing weekly series with adult oriented, delicate subject matter, and quality writing. Network TV needed something like that to attract viewers. They were looking for a drama that was unlike anything viewers had seen before. Something to compete with cable. Steven Bochco and David Milch, who had previously brought Hill Street Blues to TV, had the idea of a police show set in New York City called NYPD Blue. The show would not only deal with the day to day goings on in a detective squad room, but also the personal lives of the detectives. This was similar to Hill Street Blues, but TV had gotten away from dramas like that since it had left the air in 1987.

Bochco fought with the networks over what could be done on TV, and the give and take between him and ABC delayed NYPD Blue by a whole year. The pilot was produced and started making the rounds with critics. The buzz surrounding the pilot of NYPD Blue had people talking for weeks to come. Dennis Franz played detective Andy Sipowicz, an alcoholic racist detective, who in the first 5 minutes of the pilot episode grabbed his crotch while yelling at a district attorney. As the episode rolled on, they pushed the envelope even more as Detective John Kelly (David Caruso) and Officer Janice Licalsi (Amy Brenneman) made love for the first time. Parts of their naked bodies never before seen in a commercial network prime time program were shown and America’s collective jaws dropped.

The American Family Association, a group led by the Rev. Donald Wildmon, cleverly attacked the show where it would hurt most: local affiliates. Specifically, the AFA targeted major advertisers (car dealers, food retail chains) in individual markets, urging them not to support a station that would carry such a vulgar program.

Despite the pressure, ABC execs backed their entertainment team, but told them, as Bochco recalls, “If it blows up in our faces, our skirts won’t be big enough for you to hide behind.”

The protests by the AFA backfired, and actually helped make the show a hit. When the pilot finally aired, the backlash just made people want to tune in more and the show premiered to huge ratings with more than 30 million people tuning in. Though the audience waned a bit over the years, 20 million viewers tuned in for the series finale in 2005.

The nudity and language, while a part of the show, were not what the show was about. The quality writing and acting is what propelled this show. Jimmy Smits replaced David Caruso midway through season 2 and the show hit its stride.

While TV has grown in terms of quality, it has been mostly on cable. Network TV has seemed to lose a bit of its edginess since NYPD Blue went off the air. However, the impact of the series will be felt forever. After 24 years, the legacy of NYPD Blue is solid. It was the program that turned police shows into much more realistic and character driven programming and made the large ensemble cast almost standard for the genre. The influence on classic, high quality police shows like Homicide, The Shield, and Southland are undeniable.
NYPD Blue aired for 12 seasons and an amazing 261 episodes. In that time, the show would garner 84 Emmy nominations and 20 wins including Outstanding Drama Series in 1995. Dennis Franz would win for Outstanding Lead Actor in a Drama Series 4 times over the series run.

NYPD Blue remains a show that is sorely missed in today’s TV landscape.