By ValleyPatriot on September 28, 2015Comments Off on TV TALK WITH BILL CUSHING ~ Rectify: The Best Show You’re Not Watching 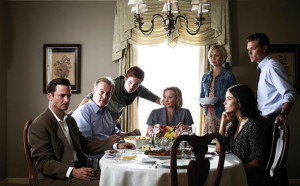 I’m asked a lot if I have any recommendations of anything good to watch on TV. Any shows that may be under the radar or that are not very well known? This month I’m going to talk about just such a show.

That show is called Rectify. Rectify just finished its 3rd season on the Sundance Channel. It was Sundance’s first entirely scripted show when it premiered in 2013.

Rectify follows Daniel Holden (Aden Young), a man trying to put his life back together in a small town in Georgia after spending nearly 20 years on death row. He was convicted of the rape and murder of a teenage girl, before new DNA evidence overturned his conviction.

He returns to his hometown, which doesn’t exactly welcome him with open arms. Many in the town still believe Daniel is guilty of the crimes of which he was accused.

Daniel finds support in his mother (J. Smith-Cameron), and his younger sister Amantha (Abigail Spencer) who fought for years to get Daniel exonerated. However Daniel’s stepbrother Ted, Jr. (Clayne Crawford), whom Daniel was never close to, is very skeptical of Daniel. Never believing in Daniel’s innocence, he is also extremely jealous of Daniel’s relationship with Ted, Jr.’s wife Tawney (Adelaide Clemens.)

While Daniel tries to adjust to life back in society, law enforcement is still investigating the rape and murder Daniel was convicted of, trying to prove that Daniel actually was the person who committed the murder.

The show is methodical in its presentation. The story unfolds slowly. While Daniel’s story and the mystery of his guilt or innocence is the focal point of the series, the real heart and soul of the show is the story of the family he left behind and how they’re adjusting to his return. The story is intercut with flashbacks to Daniel’s time on death row, giving us insight on what he experienced there and who he encountered. The show explores how the actions, or alleged actions, of a single person can change an entire family.

It is the changes that Daniel’s family experiences, that makes the story so interesting. It is the performances of a great cast that make the story worth watching.

While the show may be a little slow for some, watching Rectify is like reading a great book and getting lost in the story. Rectify is a show about redemption, renewal, forgiveness and the steps that people take to find their way in this world.

TV is an industry that imitates. It isn’t often that you can watch a show and really feel you are watching something unique. That is how you feel when you watch Rectify. It really is unlike anything else on TV.

Aden Young’s powerful performance as Daniel is as good as any performance on TV. Every actor on this show does such a great job conveying the emotions that each character is feeling.
Rectify was created by Ray McKinnon, who many people may know as the actor that portrayed Lincoln Potter on Sons of Anarchy. Executive Producers Mark Johnson and Melissa Bernstein have also worked on Breaking Bad and Better Call Saul. McKinnon has created a brilliant drama series, beautifully acted by an amazing cast.

The show was recognized with the 2014 Peabody Award. One of the most prestigious awards that a television show can receive.

Rectify is one of TV’s best.

The first 2 seasons of Rectify can be found on Netflix, while season 3 can be watched On Demand. Do yourself a favor and watch it.