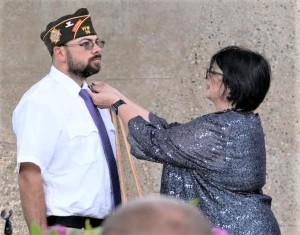 Haverhill resident Donald Jarvis was awarded the Purple Heart last month from injuries sustained over nine years ago in Afghanistan.

Army Specialist Donald Jarvis was injured when an improvised explosive device (IED) struck his vehicle.
As a combat engineer, the mission of his unit was to conduct route clearance in Southern Afghanistan. That means preventing IED emplacement and ensuring freedom of movement along the routes for friendly and coalition forces.

Today, Specialist Donald Jarvis has a traumatic brain injury, total hearing loss in his right ear, vertigo, vision issues, dizziness, and balance issues. Besides the traumatic brain injury, he also has post-traumatic stress disorder and sustained right-side physical injuries affecting his knee and shoulder. Because of Jarvis’ right-side injuries, his service dog, Mocha, accompanied him on the left. 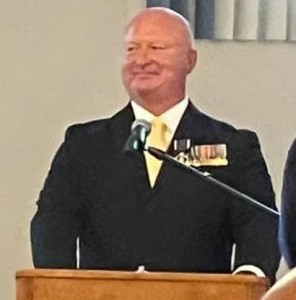 Dracut – Dracut’s Dan Cotnoir was awarded the Purple Heart last month at the American Legion in Dracut after 18 years of waiting for the military to find his paperwork. Cotnoir was given the highest military award for injuries he received in battle on September 6, 2004, outside Falujia.

Prior to his injuries in Faluja, Cotnoir was tasked with cutting down the dead bodies of American Servicemen that were left hanging from a bridge after being tortured and killed by the Taliban.
Cotnoir took debris to his face and forehead and suffered a traumatic brain injury as the result of a roadside bomb.

“When I first found out that I was going to receive the Purple Heart I felt very grateful, but when you actually get it pinned on you, it’s very emotional. You really feel the weight of what it means. You don’t think of yourself as someone who rates getting this award. It’s so humbling!”

Cotnoir says that former Valley Patriot of the Month Donald Boulet was responsible for Cotnoir finally getting his Purple Heart after 18 years. “He’s the one who picked up the ball and got it rolling. The paperwork got lost and Boulet made sure I got it. He was my sergeant when I was a private first class. He served in my unit at Devens, but when we got deployed, I went to a separate unit. He made this happen.◊

HELP US KEEP THE NEWS FREE