By ValleyPatriot on May 1, 2021Comments Off on U.S. Army Chris Coakley and U.S. Air Force Vet Stephen O’Donnell ~ HEROES IN OUR MIDST, VALLEY PATRIOT OF THE MONTH 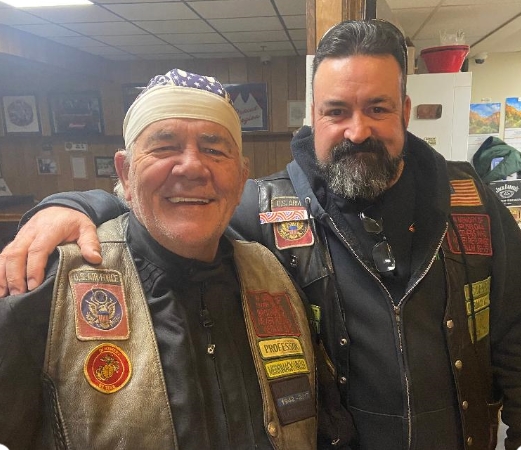 During the summer of 1989, a small group of Harley Davidson riders, who were also veterans of the Viet Nam war and sworn police officers, formed the original chapter of the Nam Knights.

The Club was founded in New Jersey by Jack Quigley, now a retired undersheriff with the Bergen County Sheriff’s Department. He had served as a platoon sergeant with the 11th Motor Transport Battalion, First Marine Division. Today the Nam Knights of America Motorcycle Club has grown into an organization with 69 chapters in sixteen states, Washington D.C. and two Canadian provinces. The group has hundreds of members, consisting of veterans of all eras as well as law enforcement personnel.

From the Fraternal organization’s website is their mission statement “The mission of the Nam Knights is to honor the memory of American Veterans and Police Officers who have lost their lives in the line of duty, to assist Veterans and Police Officers in their time of need, and to promote community awareness through sponsorship and participation in various community and fund-raising events.”

Also, from their website, is the organization’s demographics; current membership is made up of half of the members being police officers, both active and retired and half of the membership is made up of Viet Nam and other military era veterans, plus a few patriotic motorcycle enthusiasts. This last group who are non-police/non-veterans, enjoy all the benefits of any member, but cannot hold executive positions from 1st Sergeant at Arms, up through and including the position of President. All members ride bikes manufactured by the Harley-Davidson Motor Company, the Indian Motor Company or custom-built motorcycles, with the appearance and construction of which is identical to a Harley-Davidson, and which engine parts are interchangeable with a Harley-Davidson and having an engine displacement of 750cc or above.

US Army Veteran Chris Coakley served with 10th Mountain Division as a Medic. Like many of today’s Veterans, he joined for the opportunities that military service brings, and to give something back to our Nation. After leaving the Army, he built on his training as a Medic, and became a critical care nurse, an RN. He has a wife, four daughters, and a granddaughter. He enjoys the fellowship and camaraderie of being both a member of the NAM Knights and the American Legion. He particularly enjoys participating in both organizations many patriotic activities.

US Air Force Veteran Stephen O’Donnell enlisted in 1968, rose to the rank of Sergeant. He spent more than 4 years in the USAF and served in Combat Support Groups for 23 months in South East Asia during Viet Nam. He was an aircraft electrician, and during his time worked on B-52s, KC135s, F4s, EC 121s, and AC 130s. After leaving the service, he worked as Laborer, a Teamster, and after becoming a Somerville Police Officer he attended and completed college receiving graduate degrees in CJ and Psychology. He then became a professor at NHTI, Community College in Concord, NH, where he taught for 22 years. He has a wife and two sons. After retiring the Professor took a 40-day motorcycle trip of more than 10,000 miles travelling cross country and back at 67 years of age.

Both the Dracut American Legion and the NAM Knights join for a myriad of patriotic and civic activities. These range from food drives, to clothing for our troops overseas. The NAM Knights constructed a wheelchair lift for a disabled Dracut Veteran at his home. They are involved with a Bass fishing tournament at Camp Robindel in Moultonborough, NH that focuses on young, inured Veterans.
The Dracut American Legion asks all World War II, Korean War, and Vietnam War Veterans, to call (603) 518-5368 and sign up for an Honor Flight to the Memorials in Washington DC! Veterans of all eras are asked to go the American Legion’s Web site www.legion.org, and join the American Legion, preserving our Veteran’s Benefits for future generations.