By ValleyPatriot on January 1, 2020Comments Off on U.S. Navy Chief Quartermaster Marshall Rogers Sr. ~ HERO IN OUR MIDST, VALLEY PATRIOT OF THE MONTH 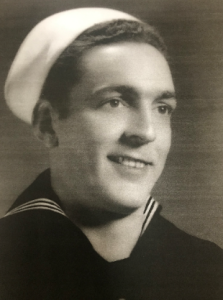 Marshall Rogers Sr. was born in 1921 on his family dairy farm in North Andover, MA. He was the second youngest of nine children.

He claims to have walked over 3,000 miles as a child while going to school in North Andover making two round trips per day, going home for his lunch and then walking back to school again.

Although there was very little family money during the Depression, he was happy to always have plenty of food on the table while living on the family farm.

As a teenager, he plowed the snow from the sidewalk on Sutton’s Hill in North Andover with a horse drawn plow. Shortly after the Japanese attack on Pearl Harbor, he enlisted in the Navy at the age of twenty, ironically, he couldn’t swim.

Marshall first served aboard the US Navy Battleship, the USS Wyoming BB 32, (his ship was a Veteran of World Wars I and II) and later be assigned to the USS Balduck APD 132, an amphibious assault ship. Named after US Marine Corporal Remi A. Balduck, a recipient of the Navy Cross, who was killed at the Battle of Guadalcanal. The Balduck’s mission was to land small units of Marine or Army special forces and Navy frogmen on the Japanese held beaches of the Pacific Islands.

By the end of the war, he was promoted to Chief Quartermaster and was serving aboard the minesweeper USS Bunting YMS 170. The ship was tasked with clearing mines in Leyte Gulf, the site of the greatest naval battle in history. He tells a great story of sailing thru two typhoons on this round bottomed minesweeper.

Valley Patriot readers would be hard pressed to find a twenty-four-year-old Chief in today’s US Navy. During my own career in the Navy, I always worked for, and reported to, a Navy Chief. Rarely did I, or any others serving in the Navy as a Petty Officer First Class, interact with a Commissioned Officer. These Chiefs were, and are, the greatest leaders I have ever met. In civilian life, only occasionally do I meet a leader that is of the same caliber of a US Navy Chief Petty Officer.

But most Chiefs in the modern US Navy are in their 30s or 40s, not twenty-four years old! (To compare, I was twenty-five when I made First Class, the rank directly below Chief). Marshall told me during our talk, that he would have remained in the Navy after the war ended. However, most ships were being decommissioned and he couldn’t get orders back to sea duty. At sea, a Quartermaster steers and navigates the ship. Since he did not want to shuffle papers at a desk serving with a shore-based training command, he left the Navy for civilian life. He was honorably discharged in 1946.

He married the love of his life, his wife, Eleanor in 1950, and the couple were married for 60 years prior to her death. They have five children, eleven grandchildren and ten great-grandchildren.
After his wedding, the couple lived in Lawrence until Marshall’s retirement from the New England Telephone Company. He had a successful career with the telephone company and was widely known for his troubleshooting ability and technical skills. He was always in demand, being called upon to repair and update equipment throughout New England.

At his retirement party, the Lawrence Elk’s Hall on River Road was packed to capacity. He had great tenacity in life. Nothing in life was going to get the best of him. He continues to this day to be devoted to his faith, his family, and his country.

He took up golf after the war and only hung up his clubs in his mid-80s. Marshall always enjoyed his weekly golf outings with his brother Veterans from the VFW at Four Corners GC on Friday nights.

Eventually he and Eleanor became snowbirds, splitting their time between their home in Port St. Lucie, Florida and their summer home on Little Island Pond in Pelham, NH. He has recently moved into an assisted living facility where he has enjoyed becoming reacquainted with old friends and making new friends from his generation.

His famous motto to explain his longevity is “If you rest, you rust”!

In order to honor this American Hero and his family, I enlisted his son Marshall Rogers Jr. as our co-author for the December Hero in Our Midst article!

This year? Please consider giving a Veteran or Active Duty Servicemember the gift of American Legion membership. Simply go to www.legion.org and sign them up!