By ValleyPatriot on August 22, 2020Comments Off on US Navy Seabee Kevin Donahue ~ VALLEY PATRIOT OF THE MONTH (Aug, 2020) 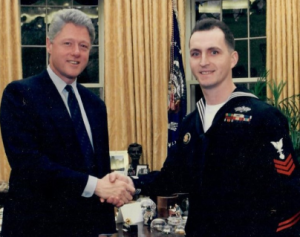 LAWRENCE – Greater Lawrence Technical School graduate and Lawrence native, Kevin Donahue, and I recently had dinner at Methuen’s Muddy Waters Restaurant. We had a fantastic meal, and the Donahue family really enjoyed the beer, pizza, burgers, served by their terrific staff. During dinner, Kevin told me about his family, his education, and his working career, first as a Senior Chief Utilitiesman in the Navy, and later as a GS-15 Life Cycle Logistics and Facilities manager with our Federal Government.

Here is Kevin in his own words; “I joined the United States Navy in 1984, best decision I ever made. I was raised and educated in the City of Lawrence Public Schools, finishing my studies in electrical construction at the Greater Lawrence Technical High School, where I graduated with Class of 1981.

After spending three years adrift in Lawrence, trying to figure out what I wanted to do with my life. I went down to the Navy Recruiter on Essex Street to see what the Navy had to offer. They offered me a position in the Seabees, the construction force and combat engineers of the US Navy. I was provided challenging training in the field of utilities, including; plumbing, HVAC, boilers, pumps, and other mechanical systems at the Naval Training Center, Gulfport, Mississippi. This training as a plumber, fit well with my training as an electrician in high school, set me on a course for an outstanding career in national defense.

Later in my Naval career, I was trained by the US State Department to be a locksmith. This cross training in the building trades, as an electrician, a plumber, locksmith, my hobby of woodworking, and most important the leadership training I received as a US Navy Chief Petty Officer, were invaluable in helping me reach my personal and professional goals.

The phrase, “join the Navy and see the world” is a very true statement. I was either deployed or stationed in the Pacific, Atlantic, Caribbean or Mediterranean area serving during both Desert Storm and Iraqi Freedom, and Enduring Freedom, as a Seabee. I worked my way up as a Constructionman in 1984 to a Senior Chief Utilitiesman and Command Senior Enlisted Advisor in 2004. While serving, I was able to take advantage of the Navy’s tuition assistance program, and was always encouraged by my Navy leaders to, “hit the books”. I earned two degrees, while still on active duty, an Associate in Arts from Hagerstown Community College in Maryland in 1994 and a Bachelor of Science Degree in Leadership and Management from Old Dominion University, Norfolk, Virginia in 2002.

During my career in the Navy, I was selected for Presidential Support Duty within the White House military support organization. and a special assignment in the United States Department of State at multiple American Embassies overseas. This gave me the opportunity to meet two American Presidents and one Apollo Astronaut.

I met my beautiful, loving and supportive wife Lori, while assigned to Presidential Support Duty in Maryland in 1990. Lori is a native Marylander. We were married in 1992, nine years into my Navy career. Our son Timothy was born in 1993 and he had the chance to accompany his mother and father to Berlin, Germany while I was assigned there to the US Embassy from 1995-1998. Our son, Kristopher was born in 1998 after we returned from Germany. Timothy is now employed at the Marine Corps Base Quantico. Kristopher was a member of his high school varsity baseball team, a team that reached the Virginia State Championship Game in 2016. He is currently a student at Germanna College in Virginia.

Every year my family enjoys three weeks on the New England coast, playing 45s and Striper fishing!
Caught some very large ones in 2020.” A terrific journey from the Beacon Street neighborhood of Lawrence, Massachusetts to earning the US Military’s Presidential Support Duty Badge, Lawrence’s Kevin Donahue US Navy Seabees-Retired, still serving our Nation in Washington DC.

The Dracut American Legion asks all World War II, Korean War, and Vietnam War Veterans, to call 603-518-5368 and sign up for an Honor Flight to the Memorials in Washington DC! Veterans of all eras are asked to go the American Legion’s Web site www.legion.org, and join the American Legion, preserving our Veteran’s Benefits for future generations.