By ValleyPatriot on June 16, 2021Comments Off on US Navy Veteran Louis McAloon – Lifeguard Duty off the Coast of Vietnam ~ VALLEY PATRIOT OF THE MONTH ~ HEROES IN OUR MIDST 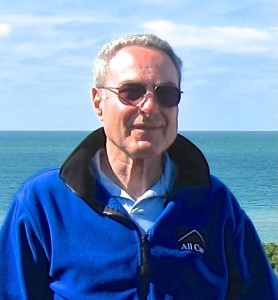 NORTH ANDOVER – North Andover’s Louis McAloon served in the US Navy during the Vietnam War, enlisting shortly after graduating from North Andover High School. He completed Basic Training at the Naval Base Great Lakes with Recruit Company 190. After Basic, he was sent to Naval Air Station Memphis, Tennessee for training as an Aircraft Mechanic.

Unlike the other services, which have Military Occupational Specialties, or “MOS” designations, that indicate the enlisted man’s assigned duties, the US Navy and US Coast Guard use “ratings”. Louis served as a jet engine mechanic or Aviation Machinist Mate 3rd Class. In the US Navy or Coast Guard, an enlisted man has a rank, Louis was a Petty Officer 3rd Class. Sailors and Coast Guardsman, also have a rating, Louis was an Aviation Machinist Mate. Sailors also have a pay grade; Louis’s paygrade was E-4. The system is not as complicated as it sounds, rank is a level of leadership responsibility, rating is what your technical job is, and paygrade is simply how much money the government owes you each month for your service.

In wartime, the immediate need of the Navy always come first. During the Vietnam War, our Navy needed more helicopter mechanics, much more so than jet mechanics. This need led to the Navy selecting Louis to receive further training on repairing and maintaining helicopters. As a member of Helicopter Anti-Submarine Squadron Eight, Louis embarked on the USS Bennington CV-20. His ship was an Essex Class Carrier. The ship and her crew, served our Nation in World War II, supported the US Space Program, deployed off the coast of Vietnam, and ended her service during the Cold War. Louis was, onboard during, and involved in, the recovery of the Apollo 4 Mission capsule and the ships mission in Vietnam.

When Louis served in the Vietnam War, he, and his ship, were part of the US Navy’s Seventh Fleet. The Seventh Fleet spent their deployment conducting air missions in support of the ground Troops fighting in Vietnam. His Vietnam service was as an aircraft plane captain, in charge of the entire upkeep and maintenance of an assigned aircraft, for Louis, his aircraft was a Sikorsky Sea King Helicopter. The SH-3A Sea King Helicopter usually acted as a “lifeguard” during carrier air operations against the Communists. The helicopter’s primary mission was rescuing downed air crews, saving their lives, and preventing them from being captured by enemy forces.

While on the USS Bennington, he saw Bob Hope perform in a USO show, and became a US Navy “Shellback”. A Shellback is a sailor or Marine, who crossed the equator aboard a Navy warship, and a Golden Shellback, is a sailor or Marine, who has crossed both the prime meridian and the equator at the same time. The initiation ceremony has been “toned down” by Navy brass, in recent times, due to fear of media or political fallout. But during the Vietnam era, the initiation process involved in becoming a Shellback was often traumatic, and not very politically correct. Louis was awarded the National Defense Medal, the Vietnam Service Medal, and the Republic of Vietnam Campaign Medal for his four years of service in the US Navy.

After leaving the military, Louis went to work for New England Power. He initially worked mainly digging, blasting, and later was assigned to a crew as a lineman. Later, he worked as a carpenter and has finished his career as an ICU clerk at Massachusetts General Hospital. He and his wife have two daughters and one son, and one grandson. His enjoys riding his Harley Davidson and has attended the Laconia Motorcycle Rally many times. Louis is a Ham radio operator, call sign AZ1DG.

Truly a “Hero in Our Midst”!

John Cuddy served in the US Navy’s Construction Battalions (also known as the Seabees) after retiring from the Navy; he earned a bachelor’s in history and a master’s in economics from the University of Massachusetts on the Lowell Campus. He has been employed in Logistics at FedEx for the last 24 years. If you know a World War II, Korean War or Vietnam War Veteran who would like their story told, please email him at John.Cuddy@Yahoo.com. ◊

US Navy Veteran Louis McAloon – Lifeguard Duty off the Coast of Vietnam ~ VALLEY PATRIOT OF THE MONTH ~ HEROES IN OUR MIDST added by ValleyPatriot on June 16, 2021
View all posts by ValleyPatriot →