By ValleyPatriot on April 21, 2016Comments Off on Valley Patriot Awards Volunteers, Contributors at Annual BASH

“On a daily basis Jack Roy checks into The Valley Patriot office, when a driver quits or doesn’t show up Jack fills up his car with papers and goes out and covers the route. And I know this because I have been there when Jack will be on his way back from Boston for his chemotherapy appointments when he says, ‘I have to help get the papers out,’ and on many occasions I have driven with him to help him deliver.” 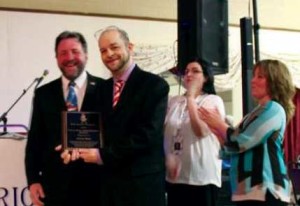 “When there are shenanigans in Haverhill, especially with our good friend Jim Fiorentini, Jack always tells the newsmakers to call us first … and they do. Jack is always willing and eager to make phone calls, gets us exclusive access to political events that we are not usually welcomed at, and never hesitates to pitch in without being asked. For these and so many reasons, our 1st VP GW Ambassador award goes to Jack Roy.”

At that point, Valley Patriot publisher Tom Duggan took to the podium to explain why the next recipients are receiving a Goodwill Ambassador Award.

“Last year, I was contacted by Lisa Wood Henshall, the best friend of a girl that was murdered in 1985 named Michelle Pimental. She said she and Michelle’s sister, Christy Rivera, had started a GoFundMe page to try and raise money for a gravestone recently, so that she would always be remembered and people could find her grave. Unfortunately, she said, they had only raised about $80 dollars in 6 months.” 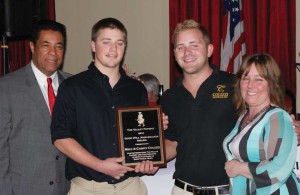 “As the result of donations from our readers, radio listeners and the Lawrence school children and administrators, we raised more than $4,000 for a headstone for Michelle.”
“But, that’s not all.”

“When we finished the first radio show to raise money, I got a call from Mike and Candy Colizzi of Colizzi Memorials in Methuen. They have been faithful Valley Patriot advertisers for years. Mike told me that they wanted to help remember Michelle, and they really felt for her family and friends. Mike said that Colizzi Memorials would donate the cost of an upgraded headstone complete with laser imagery of Michelle on the front so that everyone who visits the grave will remember who she was and what she looked like.”

“No matter what, we at The Valley Patriot always know that when we are trying to help other people, you our Valley Patriot family, always come through. So, tonight we thank our 2nd Goodwill Ambassadors Mike and Candy Colizzi of Colizzi Memorials and Haverhill resident Jack Roy.”

Lowell Mayor Rodney Elliott, a fan and frequent contributor to The Valley Patriot, then read the winners of the Valley Patriot President’s award as dignitaries looked on.

“The next award is The Valley Patriot President’s award, the winners of which are picked by Tommy Duggan himself based on … well … he’s the boss!”

The award goes to someone who volunteers their time to gather information for stories, or pitches in to help in a unique way. Tonights winners are Maria Fiato and Janet Aldrich.”

“Maria Fiato is receiving this award tonight because, if it wasn’t for Maria, this bash wouldn’t be taking place tonight. 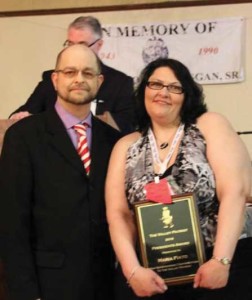 Maria has worked full time all year since last year’s BASH, calling sponsors, organizing awards, and getting raffles and sponsors for this event. She also spent the last year volunteering her time 5 days a week, to organize The Valley Patriot office, deliver papers when needed, straightening out files, and Tom says that Maria Fiato works harder than he does … which is hard to believe! It would be impossible tonight to give out Valley Patriot Awards without giving one to Maria Fiato.”
“Our 2nd winner tonight is Janet Aldrich. Janet spends her time at The State House and the Federal Court video taping and taking notes for her Catch of the Day Video News organization.”

“Last year, Tom got a tip that an illegal alien in Lawrence named Milagros Dominguez, (AKA Dirma Espada,) had been arrested by the feds for having 15 social security numbers and was being arraigned on Medicare fraud at the Federal Court. So, not being able to get into Boston the same day, Tommy put the call out on Facebook for anyone who could get into Boston to cover the hearing.”

“It was Janet Aldrich, as she has done so many times before, who called and said she was at The State House and on her way to the Moakley Federal Court building where she spent the day taking notes, photos, and getting us one of our best stories all year. She is also someone who promotes The Valley Patriot everywhere she goes, and has, on behalf of The Valley Patriot, forced elected officials to allow her to videotape public meetings in courts, at public hearings and at The State House.”

“Ladies and Gentlemen we are proud to present our two Valley Patriot President’s Award to Maria Fiato and Janet Aldrich. 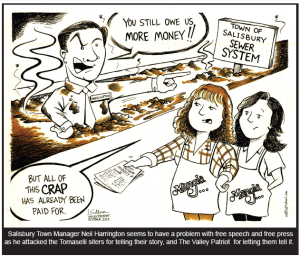 “For the last nine years Dave Sullivan of Dracut has drawn custom made political cartoons for The Valley Patriot, sometimes on a moment’s notice,” Valley Patriot publisher Tom Duggan said.

“Dave Sullivan didn’t get paid nearly enough for the incredible talent he has shared with our readers before he retired this year.”

“Dave has harpooned nearly every politician in this room, in fact one politician, Lawrence Mayor Dan Rivera says his wife loves the way he is characterized in Dave’s cartoons. Others are not so pleased, like when he drew Salisbury Town Manager Neil Harrington standing in a river of human waste. Or when he lambasted Willie Lantigua for the 100th time. But we love Dave and we hope he is going to come back and do more projects with us soon. This year we usually give out two President’s Awards but Dave has done enough for two people so this year’s President’s Award goes solely to Dave Sullivan of Dracut.”